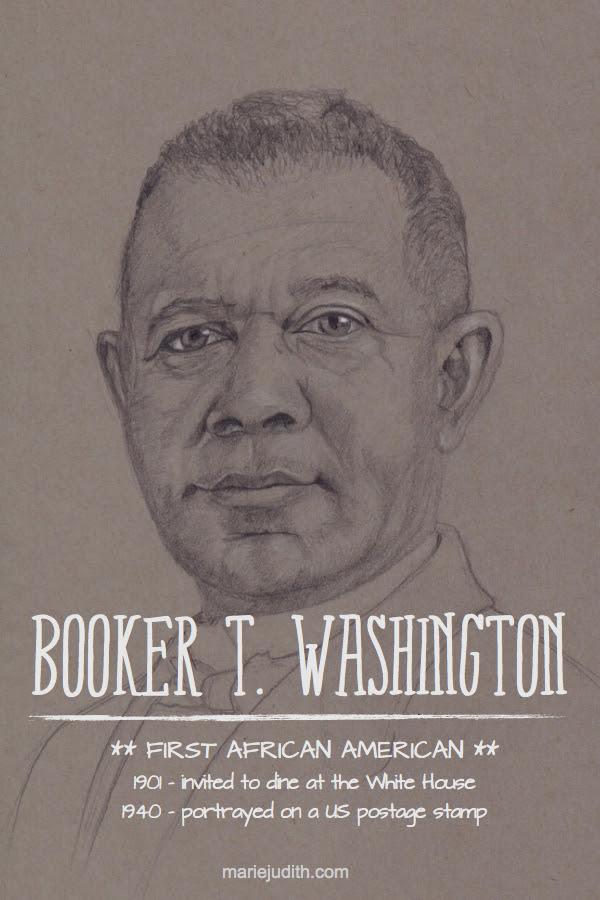 I had never heard of Booker T. Washington before doing a little research for this series of portrait, which is surprising considering all of the things he has accomplished during his lifetime. Washington was a dominant leader of the African American community from the late 1800 until his death in 1915.

Born from an African-American mother, who was a plantation slave, and a caucasian dad who's identity remained a mystery, he became a free citizen at the age of 9. He went on to pursue his education while working to earn money to pay for his education, and became the leading voice promoting the progress of African-Americans through education and entrepreneurship.

As an educator, author, orator and advisor to presidents of the United States, Washington was the giant who's shoulders key leaders, such as Martin Luther King and Barack Obama, have been able to stand on. His mission was to empower the African-American citizens through education and self help, thereby solving the problems of discrimination and inequality. He believed that by providing needed skills to society, Black Americans would play their part, leading to acceptance by White Americans.

Brooker Washington brought together middle-class African-Americans, church leaders, caucasian philanthropists and politicians to work together on a long-term goal of building the community through education and self help. His connections enabled the establishment of several black schools in rural areas through their donation of money, time and labor. He later founded the National Negro Business League in 1900 with the support of Andrew Carnegie in order to promote the commercial and financial development of African Americans. It was later renamed the National Business League in 1966 and still exists today.

Washington is also the author of several books including the best selling Up from Slavery, still available today. Following the success of his book, he and his family were invited to dine with President Theodore Roosevelt at the White house. He was the first African American to be invited.

Washington continued to work on his mission until his death at the age of 59, due to a heart failure. His legacy includes over $1.5 million to the Tuskegee Institute, the school he lead for most of his life, as well as the education and empowerment of the black population in the South. His contribution to American society granted him an honorary master's degree from Harvard University in 1896, and an honorary doctorate from Dartmouth College in 1901.

In 1940, several years after his passing, Washington became the first African American to be depicted on a United States postage stamp. He later was honoured on the first coin to feature an African American ( from 1946 to 1954).  A memorial was dedicated to him in 1984 at Hampton University near the historic Emancipation Oak, and another memorial was erected for him in 2009 at the West Virginia State University. Several schools throughout the state have also been named after him.  Brooker T Washington is a key player in Black history who had a dream of inspiring former slaves and their future generations to become more. I bet he would be proud to see how far we've come, 100 years after his death.
ON 20.2.15