The 6 Lessons Arnold Taught Me 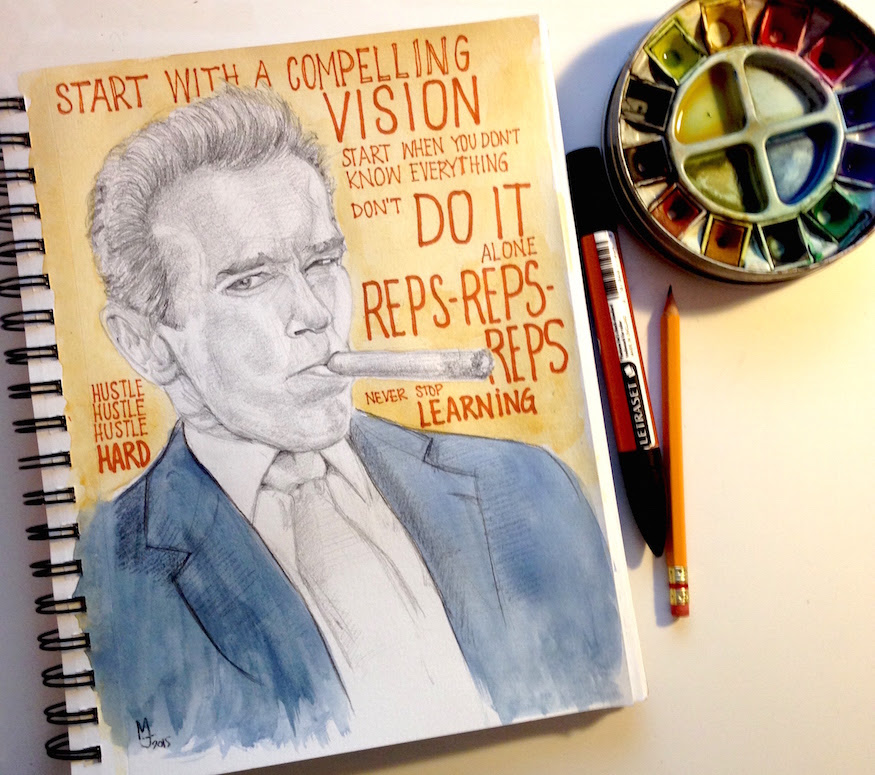 So I finished Total Recall and found a lot of great lessons that can actually be applied in my field. Success leaves clues, and his book is full of tips related to success. The great thing about the clues found in this book is that they can be used in any area of your life no matter what you’re into. The 6 main tips I got from Arnold are :

1. Start With a Compelling Vision

“ So I stuck with my original vision : a letter or a telegram would come, calling me to America. It was up to me to perform well and do something extraordinary, because if Reg Park had gotten to go there by doing something extraordinary, then I also would get to go by doing something extraordinary” (pg. 70)
Visualization is a big part of reaching your goals. You have to know what you want in details, have a compelling reason for it and see yourself achieving your goal before you can begin to make it happen. If your vision doesn’t move you, chances are it won’t happen. Then, once you have a clear vision, you have to do everything in your power to get from where you are to where you want to be. Often people don’t really know what they want and that’s the main reason why they don’t get what they want.  Once you know for sure what you want, make sure you have a picture so clear you can feel it pull you towards it, and then put all your energy into making it happen.

2. Start When You Don’t Know Everything

I like to always wander like a puppy. I walk into a problem and then figure out what the problem really is. Don’t tell me ahead of time. Often it’s easier to make a decision when you don’t know as much, because then you can’t overthink. If you know too much it can freeze you.” (pg. 150)

Often, knowing too much can be detrimental to getting things done. I call it Analysis Paralysis.  It’s something I often have to watch for because I can easily get so caught up in planning the perfect thing that it doesn’t end up getting done because it’s will never be perfect enough. I like Arnold’s approach to situations like these : know enough to get started and clean up as you go. He also goes on to say something that really stuck with me about his two-times PhD economics professor, while he was taking business classes : “Knowing it all is not really the answer, because this guy is not making the money to have a bigger car. He should be driving a Mercedes”. His professor had a Volkswagen Beetle.

“ It was a privilege to get such an inside view of a presidential campaign, especially just two week before the election. I’d never been involved in even a mayoral election, but now here I was seeing what the candidate does on the plane, how long he sleeps, how he preps for the next speech, how he studies the issues, how he communicates , and how relaxed he makes it all look.”  (pg. 372 )
One common theme throughout the book is the fact that Arnold always surrounded himself with peers having similar aspirations, as well as multiple mentors who not only inspired him to be the best he could be but also showed him how to do so. Having peers keep you accountable. It also makes your journey less lonely and more enjoyable since you get to share your experiences with them. Having mentors gives you an advantage that no amount of studying or experience can ever give you.

From the bodybuilding days on, I learned that everything is reps and mileage. The more miles you ski, the better skier you become, the more reps you do, the better your body. I’m a big believer of hard work, grinding it out, and not stopping until it’s done” (pg. 308)

Also known as The 10,000-hour rule, practice is where it’s at. There’s not question that in order to be good at something you have to practice a lot. Although it’s rarely mentioned in the media when talking about the success of celebrities, when you start digging under the surface to really get the details of how someone goes from ordinary to extraordinary, you quickly realize that repetition is key. Reps have been a key components in Arnold’s multiple successes. It’s the foundation of his success. He did it in bodybuilding, in movies and in politics.

“Whenever I finished filming a movie, I felt my job was only half done. Every film had had to be nurtured  in the marketplace. You can have the greatest movie in the world, but if you don’t get it out there, if people don’t know about it, you have nothing. It’s the same with poetry, with painting, with writing, with inventions. It always blew my mind that some of the greatest artist from Michelangelo to van Gogh, never sold much because they didn’t know how” (pg. 342)

I always wonder what make some actors thrive and reach international status level, while others are still waiting tables. I always thought it was very similar to the difference between an multimillionaire artist like Damien Hirst or Jeff Koons, and other great artists who still need a 9 to 5 job to pay the bills. In Arnold’s opinion it’s in the works after completing the masterpiece that makes the difference. Creating the masterpiece is only half of the big picture.

“For the next week, I was basically in sponge mode. The staff called it Schwarzenegger University, and the house was like a train station, with experts coming and going constantly” (pg. 502)

Although being a know-it-all is not the goal, it's important to alway be learning. Most common people stop learning as soon as school is no longer an obligation. Successful people on the other hand never stop learning. There’s always something to learn, there’s always someone who knows more than you from whom you can learn from.  By allowing yourself to learn, you can grow into a better version of yourself and accomplish a lot more in your life.  Arnold never stopped learning, he went to school to complete a business degree, learned English and took acting lessons while he was winning titles as a body builder. Needless to say, he was the most successful body builder. Even after he was officially elected governor, he took the time to learn as much as he could from experts in various field in order to make sure he would do the best job he could as a politician.

Being a student of life and staying curious will always put you at an advantage and make you interesting. It will enable you to connect and relate to more people and make you a happier person in the long run. Did you know that Arnold is also an artist? He use to draw castles in pen and ink and paint Christmas and birthday cards for his wife and kids.