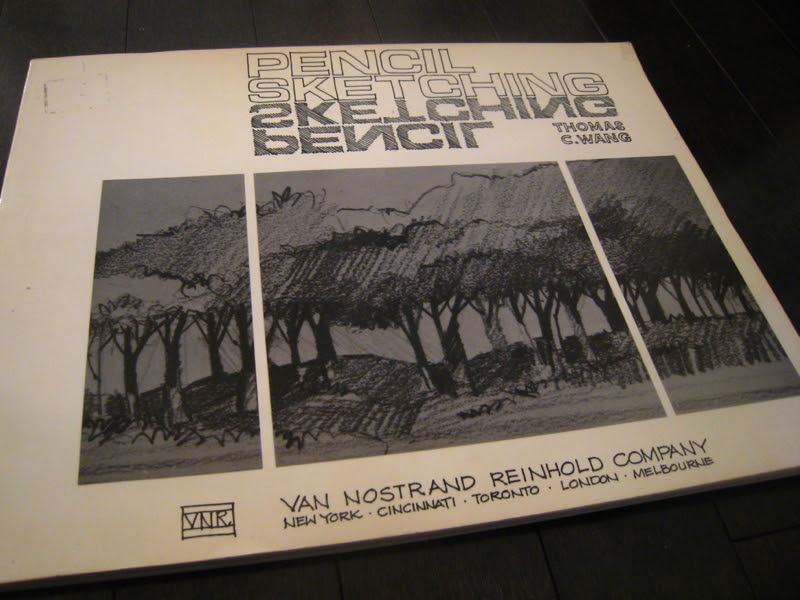 I recently picked up this book from Thomas C. Wang called Pencil Sketching, in a used book store. It's a simple book that shows various techniques to draw with pencils. Since I have tons of pencils that I'd like to put to good use, I decided to buy it and read the entire book during my train ride back home. It was a quick read, showing techniques to draw various items and what tools to use when. The author is a landscape architect so the drawings focus around things like trees, water, buildings, cars and people.

The best way to evaluate the book is to start drawing using the suggested techniques. So even thought I only had markers with me at the time, I decided to reproduce a couple sketches using markers instead. It turned out pretty good as you can see below and will definitely help with my urban sketches. 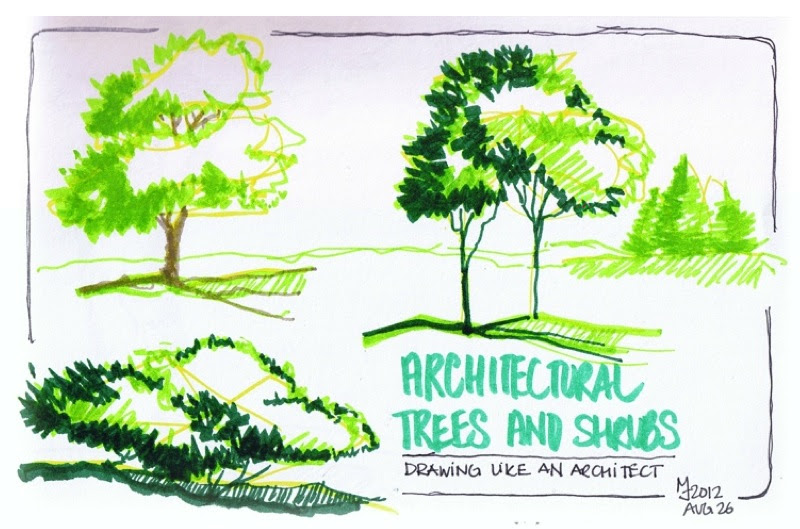 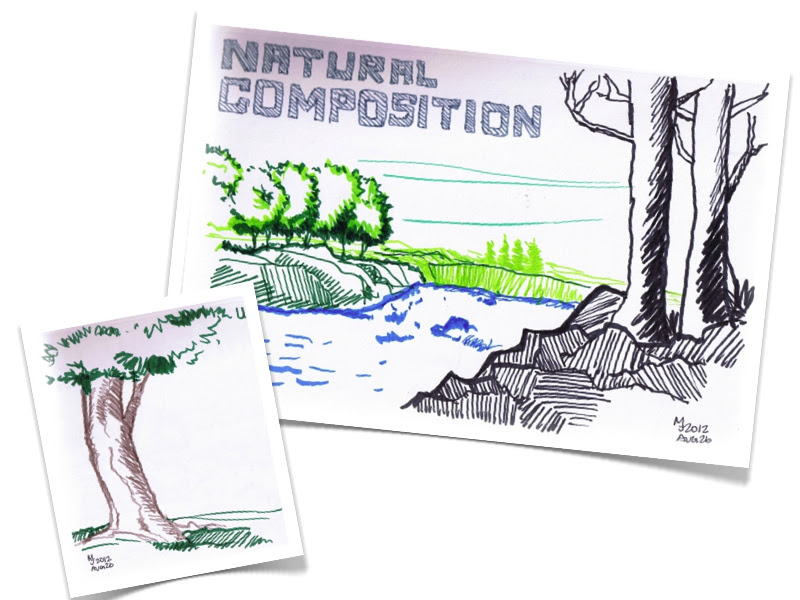 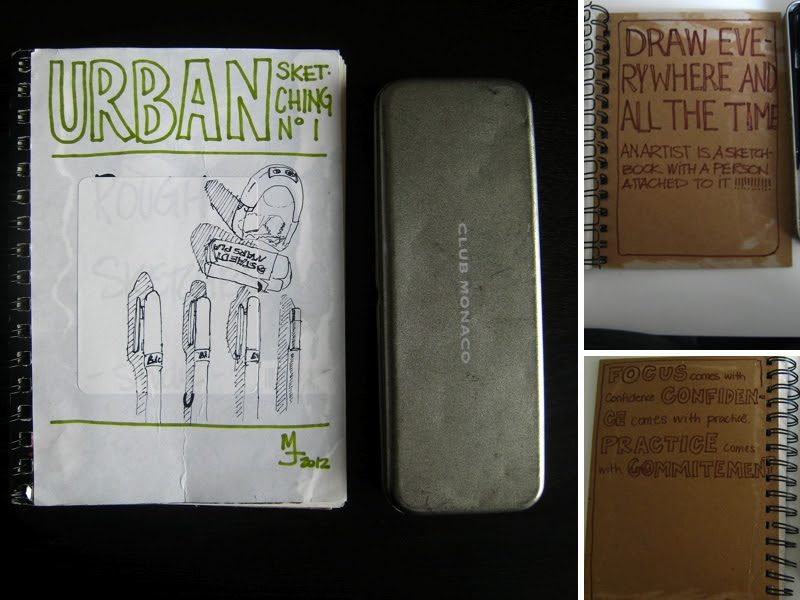 I've been itching to do more urban sketches, especially after seeing so many beautiful drawings from various members on the Urban Sketchers facebook page. I had an old sketchbook that I repurposed in order to do more urban sketches. During my short trip to Toronto, I took some time to do a couple sketches while waiting for my train and while on the train. Since I'm starting, I'm using what I already have and what's easy to bring along. I brought a Pilot fineliner and Crayola markers for a little bit of color. I added a couple photos below for reference. 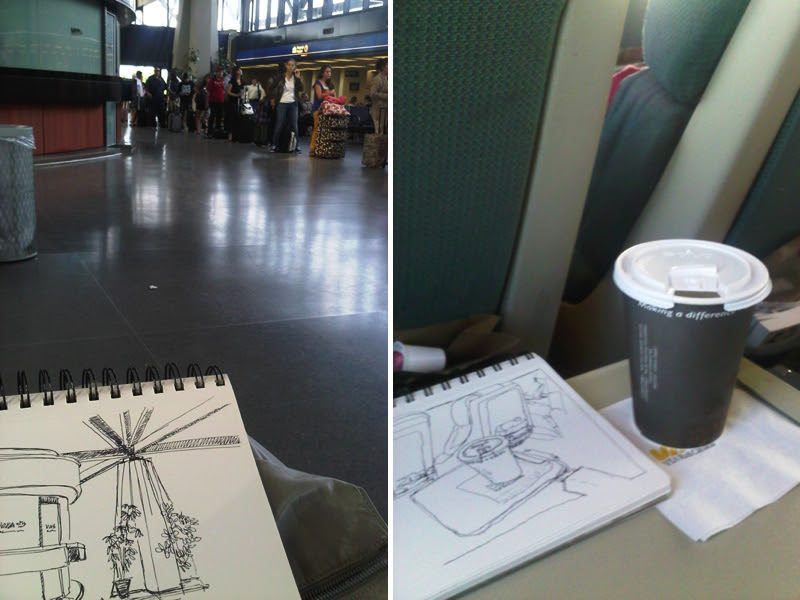 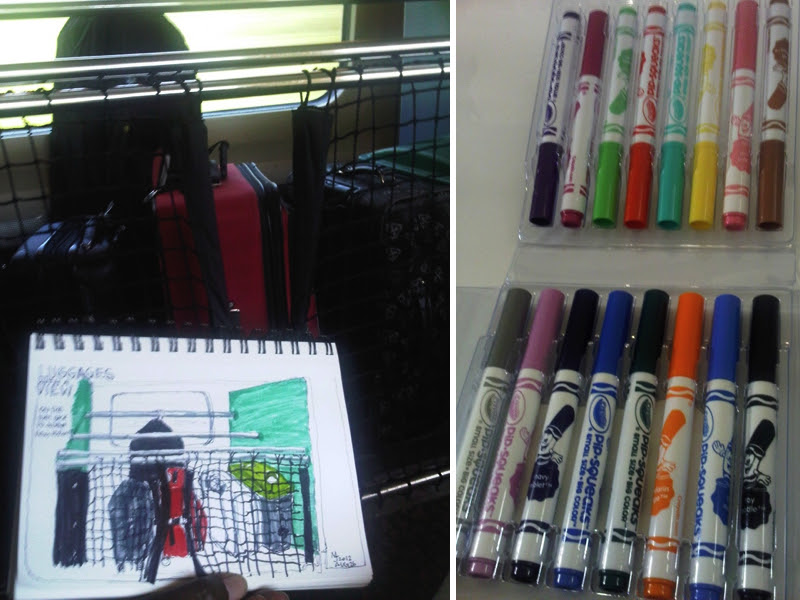 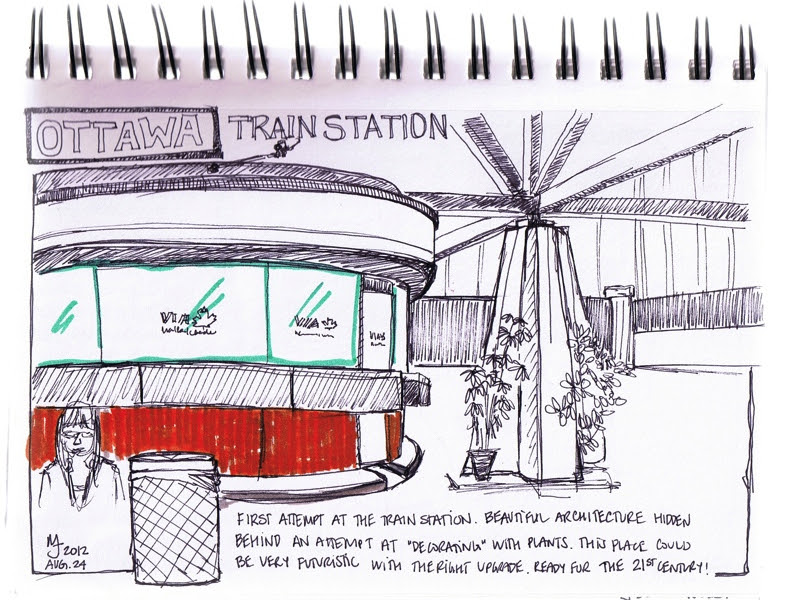 In the first sketch, you see a portion of the Ottawa train station from the inside. People started lining up up when I was almost done so I didn't add them. I really like the architecture. It's very modern and bright, although I think the finishes and accessories need to be updated. The information booth is a circular structure covered in part by a wood laminate at the bottom and glass on top. It would be awesome if everything was bright white with bright color accent à la Karim Rashid. Also for some reason, it seems like they are trying to hide the beautiful columns with random plants. I don't think they realize what a gem they have there. 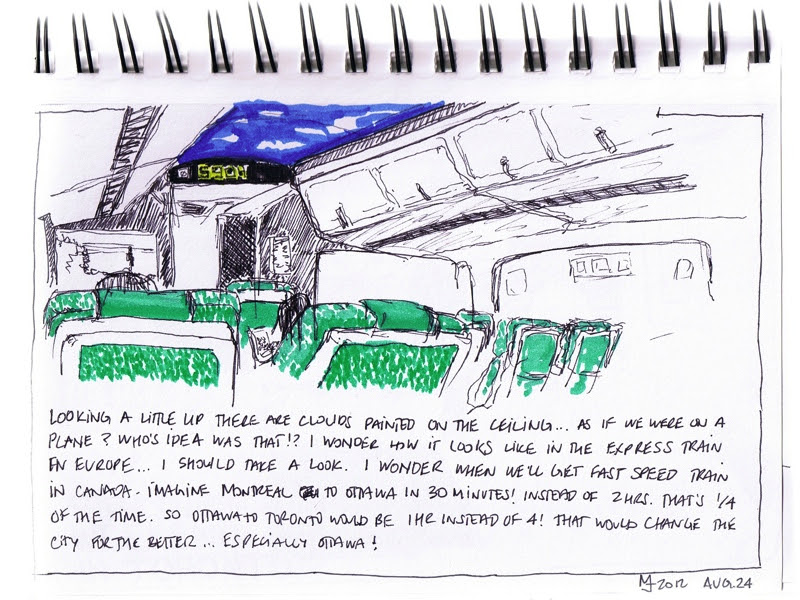 Inside the train (in the economy class), the decor is also very old school and a little tired. There's a faux finish on the ceiling of the cars representing the sky, which I don't really get. It looks like an old plane. 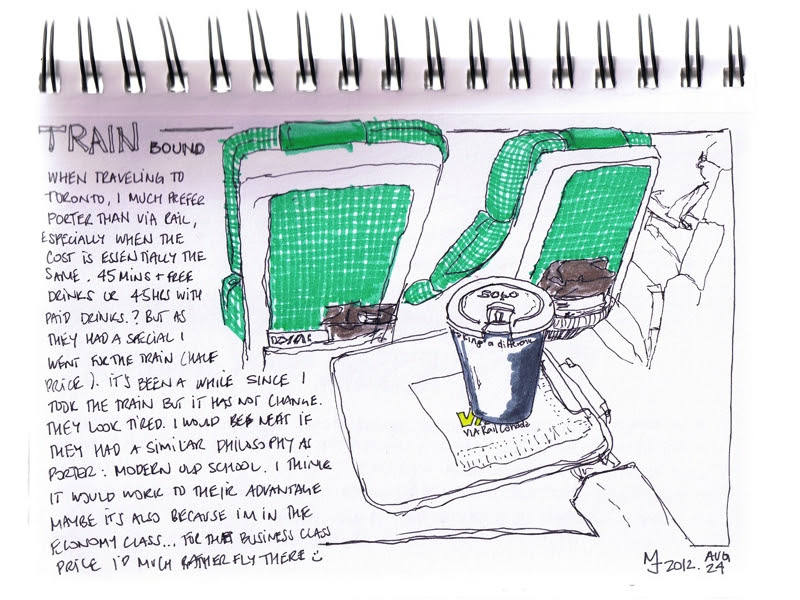 I had a $3 diluted coffee :(.  I wish they followed the lead of the likes of Porter Airlines but for trains, offering "snack and beverage service on all flights, including complimentary soft drinks, wine and beer" and cool uniforms. Especially considering the price difference between a 45 minute flight with complementary snacks and beverage as opposed to a 4 hour ride with snacks and beverage for sale.  If it wasn't for the fact that Via Rail had a major discount that weekend and that I wasn't in a hurry, I would have flown instead. But I made the most of it by taking the opportunity to do more sketches. 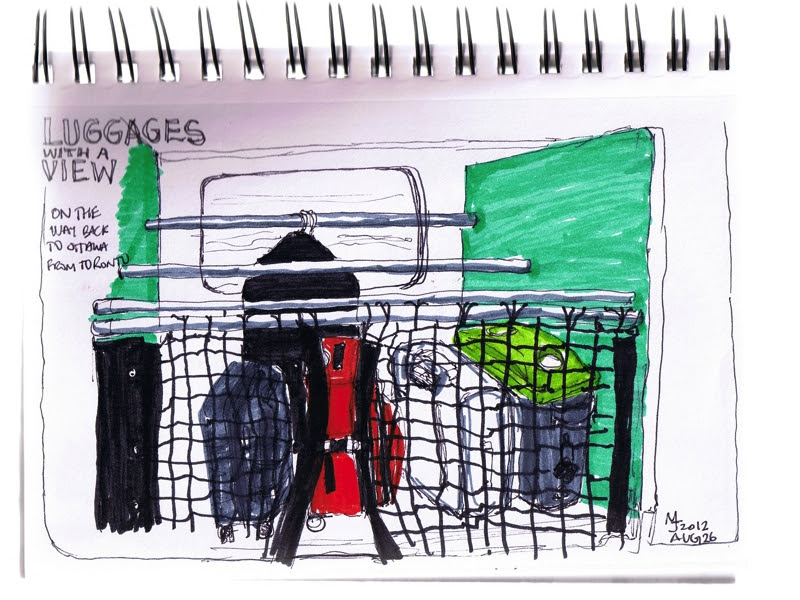 On the way back I was sitting close to the luggages, so I dedided to give it a go again. I still have quite a bit of work to get where I'd like to be, but the drawings are getting better.
ON 27.8.12 No comments: 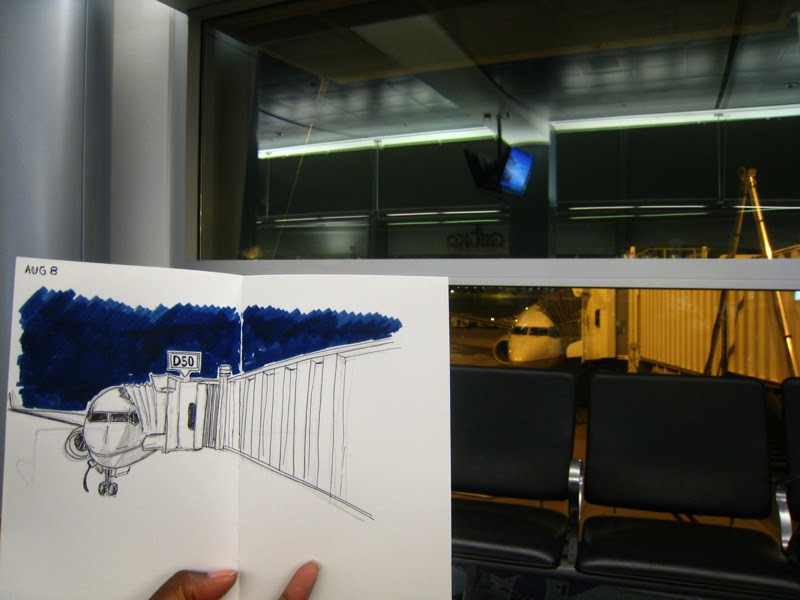 Waiting at the airport is the perfect occasion to do some urban sketching. After seeing some of the recent blog posts on Urban Sketchers about doing sketches in the airport, I decided to try it out. So while I was waiting for our plane to be ready for boarding, I drew the picture above in my new travel sketchbook. It also caught the interest of this lady who was also waiting for the plane, on her way to Rome for three weeks (so lucky).

For some reason, I never thought about bringing a sketchbook with me while traveling before and now I'm hooked! I'm bringing my sketchbook in my next trip!  I spent a good portion of the flight filling up my sketchbook and also took the opportunity to do some more live sketches of the view from my window in the sky and the seats in front of me. 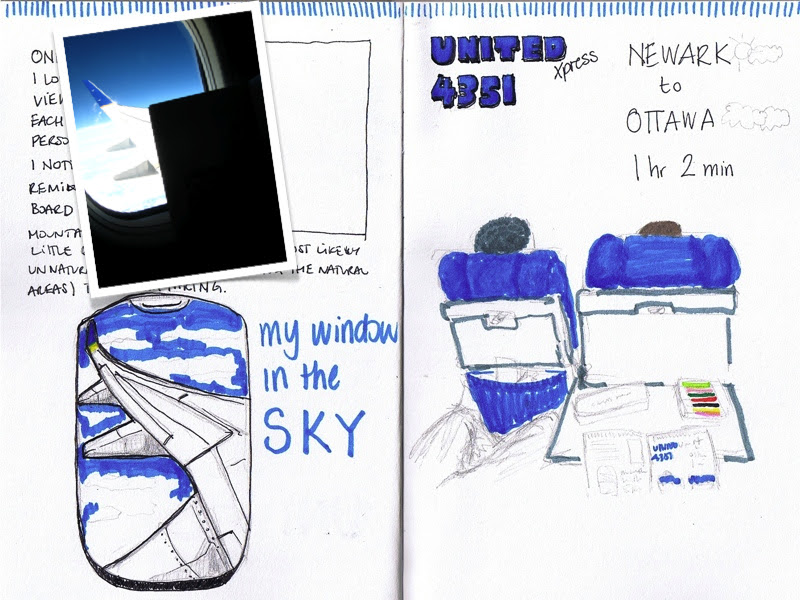 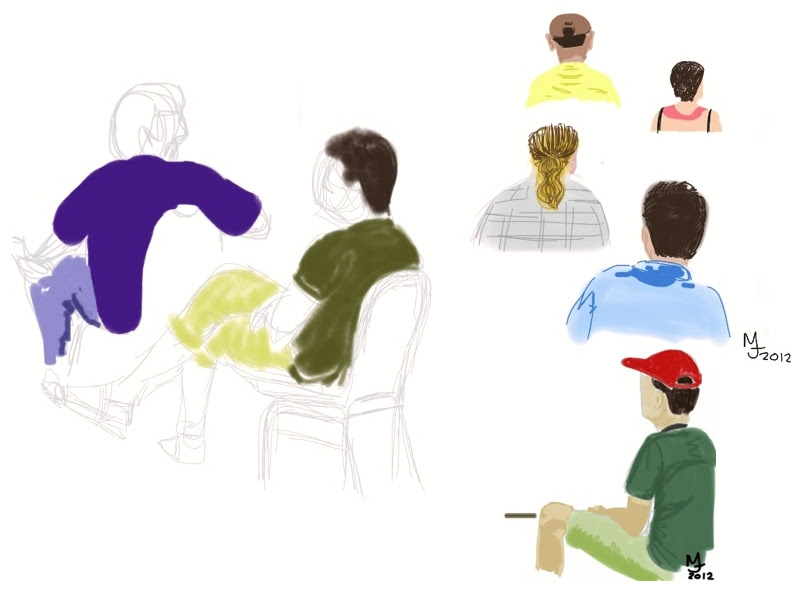 A good way to practice sketching is while attending a conference. These are some sketches I did while waiting for the next speaker to come up using Sketchbook Pro on an ipad.
ON 9.8.12 No comments: 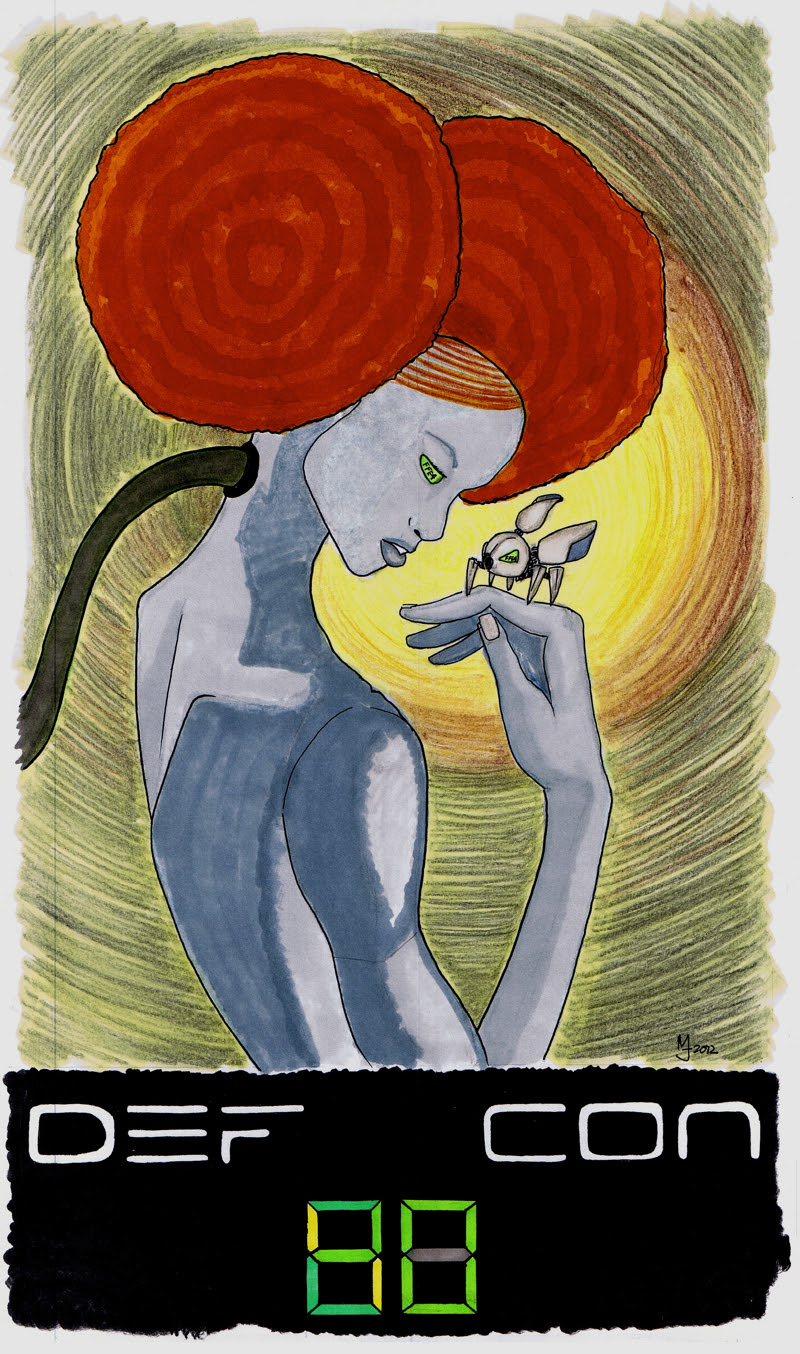 I recently decided to participate to the def con art contest. The goal was to illustrated what the conference would be like 20 years from now. Above is my entry. I'm happy with it. My idea was to show that most likely 20 years from now, the conference will also be about human-looking-robots and robot-looking-humans, both capable to hacking virtually anything wirelessly. In this case the humanoid is hacking a robot-bug just by looking at it. Judging by some of the talks this year, I'd say I pretty much on point. But for some reason I didn't even make the top 3, out of 11 entries. Hard to say what the judges were looking for but it was fun to put together nonetheless.

There were a couple interesting topic for people like me (aka non-hackers) at the conference this year. My favorite was about human hacking, a presentation given by two med students. As a first timer at this conference, it looks like there's a transition that is happening with two different trains of thoughts. It will be interesting to see where this goes.
ON 1.8.12 No comments: