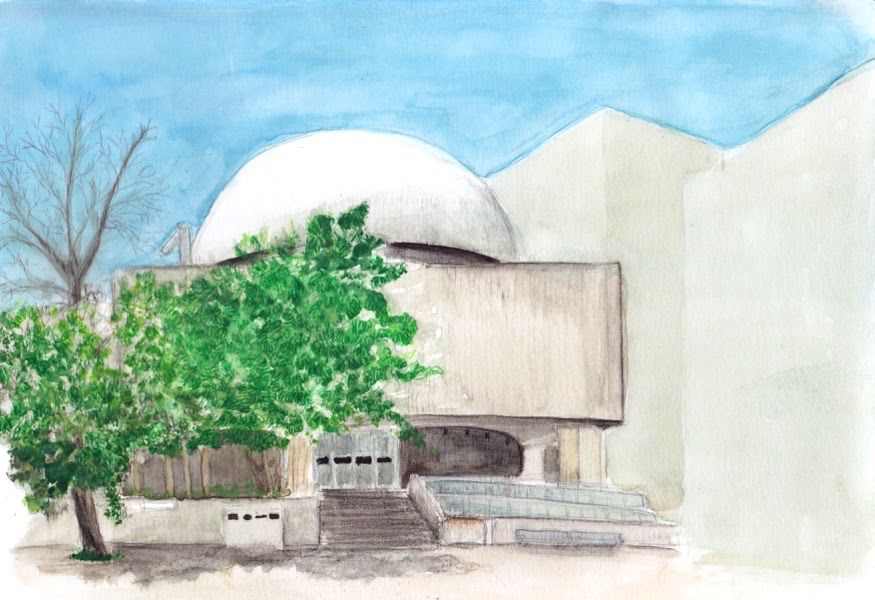 Nestled between the Royal Ontario Museum and Falconer Hall, the Toronto McLaughlin Planetarium is awaiting its demolition sentence. This unique building with a spherical roof opened its door to the public in 1968 with what was once state-of-the-art equipments to educate people about space. Now it serves as a temporary office space and a storage facility. It's very unfortunate that there doesn't seem to be any effort put into preserving and effectively using such a unique and important building. The McLaughlin Planetarium is apparently one of only ten planetarium in Canada. With all the available technologies and interests for arts and science in the city, it's difficult to understand why no one has found a way to put it to better use, specially considering the fact that it's in a prime location where other museums are within walking distance.


As a way to essentially preserve part of the history of the city, I organized a sketching session with members of the Toronto Urban Sketchers group this weekend to capture the building before it is gone for good. The sketches from this building as well as other disappearing landmarks, will be part of an illustrated book we're currently working on. You can see more sketches from our session here.
No comments: Links to this post

Everyone Has a Plan until They Get Punched in the Mouth 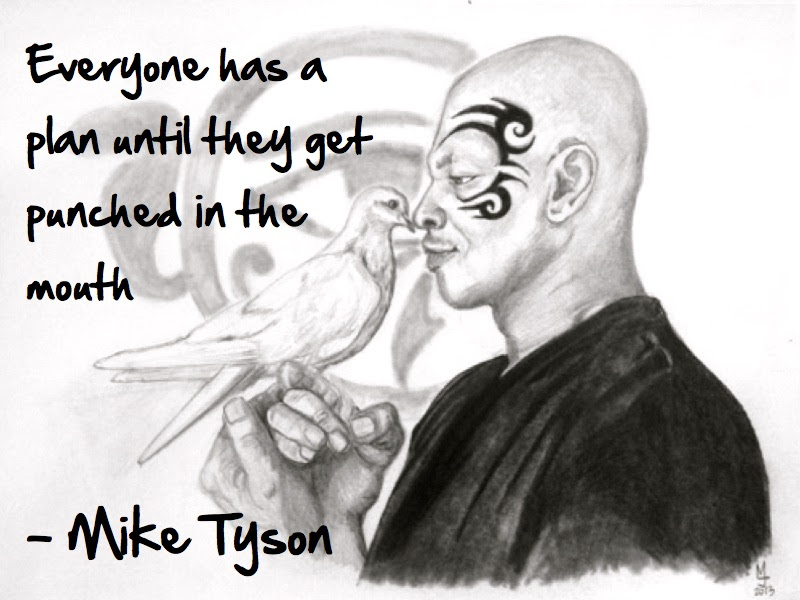 I learned a little while ago, especially when working as an interior designer, that no plans, as thorough and detailed as they can be, will completely prepare you for dealing with any situation. They help but you will still have to improvise. So you have to learn to roll with the punches, adapt and take action. Taking action very often is the difficult part, the part when a lot of us freeze and feel stuck. Some are fortunate enough to figure out a way around it and some give up and resign themselves to their unfortunate situation. When people endure unpleasant situations in a defeatist type of way, where they resign themselves to complain about their situation as opposed to doing something about it, it’s what many call “learned helplessness”. I had never heard of that term before this year and it fascinated me. Of course it caused me to look inward and look for situations where I might have displayed that behaviour, accepting what I don’t want and resigning myself to thinking that “it’s just the way things are”, not even trying to do something about it. And now every so often, I take the time to take a step back, look at my situation and see where I’m displaying that kind of behaviour and make adjustments. It’s a challenging task as it’s impossible to be completely objective about it but it’s doable.

Interestingly enough, in his book What to do When it’s Your Turn (and it’s Always Your Turn), Seth Godin talks about it in a story where two executives are on their way up in an escalator, when the escalator suddenly stops moving and they get “stuck” between two floors. One of them starts yelling for help while the other, frustrated, just waits for help to come. This scene from a Becel commercial illustrates what many people do in their lives whenever they feel stuck. They don’t do anything about it and wait for someone or something to save them, when they could simply do the work themselves. This really shook me because it’s so ridiculous to think that they couldn’t think of just walking up the escalator and be on their way. But at the same time when I start looking at some of the things I might have been complaining about, I realized that in some aspects of my life, I’ve been doing the same thing. I’ve been waiting for something or someone instead of just doing the work myself. Figure it out, that’s the beauty of life. So let’s just say that I’ve been a little more vigilant and I keep that book close as a reminder to not just wait for something to happen. Make it happen. It might work, it might not. Doesn’t matter, at least you’re moving forward.

With that in mind, I’m currently working with the members of the Toronto Urban Sketchers group to produce a book about the disappearing landmarks in Toronto with plans to sell the book and have them exhibit their work at a show in the fall. I’ve never done anything like this before but it’s a fun project I’ve been meaning for a while to do so we’ll see where it goes. So far so good.

In which areas of your life are you displaying learned helplessness? What can you do to help yourself and get ahead instead of waiting?
No comments: Links to this post