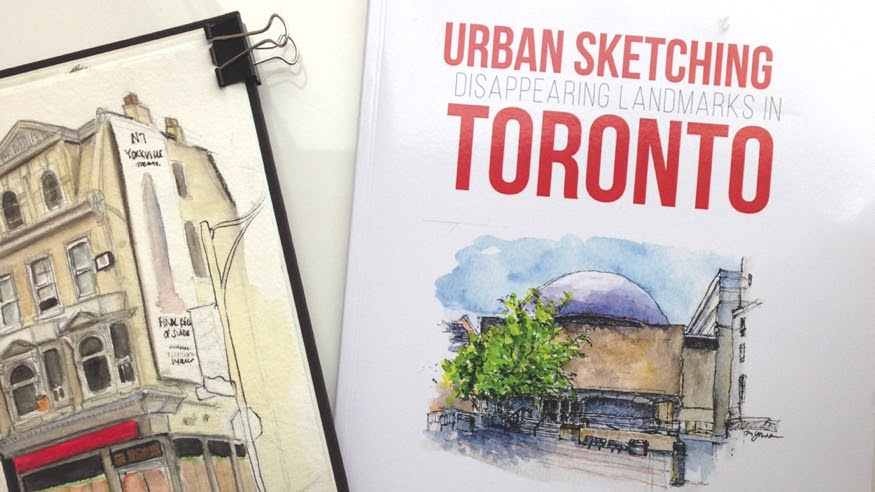 Toronto is said to be one of Canada’s fastest growing cities. Consequently, you’ll see a lot of construction year round in the city. Old small buildings are being replaced by new tall buildings in every corners of the city. I’ve only been living in Toronto for a little over two years, and already many areas don’t look the same as they did only two years ago. This growth often comes at the expense of the architectural history of the city often to the sadness of long time residents who have a history with some of these buildings. This gave  the Toronto Urban Sketchers the idea of creating a book capturing some of the landmarks of the city before they disappear, as a way to commemorate them in a creative way. So over the past couple months, we gathered around places like Honest Ed’s, the Cookbook Store, Captain John’s Restaurant Boat and more, to capture their portrait while we still had time.

21 sketchers collaborated in putting together our first book : Urban Sketching Disappearing Landmarks in Toronto. We self published the book. Towards the end of 2015, I got invited by CBC Radio to talk about the book. The interview inspired me to create a little video montage of our journey thus far.  It’s a great little memento that you can see below.


If you’re interested in purchasing the book, it is currently available on Amazon. I’m looking into the possibility of having the book available in local bookstores and libraries. It’s a first for me so we’ll see how that goes. But it was a great experience for myself and for the group and we’ll probably try to create another one this year.


As some of you already know, I recently started a YouTube channel called Toronto Real. It was not in my plans. It was one of these surprise opportunities that essentially fell on my lap and I decided to just go for it. So now I'm also a YouTuber, albeit a very novice YouTuber at the moment. Here's the story behind how it all started.

Over the past couple years, I've replaced watching television with listening to podcasts and watching YouTube videos. I think the seed of the idea of me starting my own podcast was planted when a guest on the Joe Rogan Experience, named Brian Rose and his then co-host Nic Gabriel, talked about the London Real podcast. They seemed like nice guys. Brian said something about how everyone should start their own version of London Real in their city and I thought it was a neat idea but that was about it. Fast forward a couple months later, I was redirected to the London Real podcast and started to pay more attention, especially when Dan Peña came along and invited Brian to his QLA Seminar in Scotland. Shortly after that, the London Real Academy was launched, and then I heard the call : "Build the best you". As soon as I got an invite to join, I signed up.

This reminds me of a lesson I learned watching Alex Ikonn’s YouTube channel where he was explaining that people don’t buy things because of the things themselves but because of what they believe the thing will do for them. He compared it to the video game Super Mario where Mario collects magic mushrooms to become more efficient in his quest. A good business is a magic mushroom maker in a world of Super Marios looking for ways to improved themselves in their personal journey. It made sense to me. And now, thinking back about why I decided to click “buy” and join the Academy is because Brian was essentially offering one of the "magic mushrooms" I was looking for : Build the best you. Keep in mind however that it is not a quick fix. There’s work to do. A lot of work. Once Mario gets stronger after eating the mushroom, he still has to run around to various places, step on turtles, climb lathers, avoid and fight monsters to get to the princess. In my case, I still have to work but I have a better map and I get to pick up extra tools along the way.

Joining the Academy let me to meet people literally from all over the world with a similar mindset, similar goals of building their best selves and a lot are also keen to pitch in and help wherever they can. Then this idea of podcast started to marinate in my mind. First, I just thought it would be great to have one in Toronto. I put it out there to see if anyone would bite. No one did. And then Olive, from New York Real suggested I do it. "Me!!? Well... I’m not... I don’t think... I...[insert excuse here]" Why not? Perhaps it would be a great opportunity for me to get out of my comfort zone, talk to interesting people about interesting topic and share the conversations with my viewers.

It sounded a little crazy, totally off track, but I asked myself : "Will I regret it if I don’t try? If someone else does it instead?" The more I thought about it, the more it seems like the benefits outweighed the obstacles and fear. So within a couple days, my mind was made : "I'm going to start Toronto Real!" I signed up on Twitter and on YouTube and started planning.

Fast forward 6 months laters, I have 6 interviews online. And more coming. It's great to see the progress in only 6 episodes and it will be even more fun when I get to 50, then 100 episodes. In this short period of time, I've learned so much already not only from creating the channel but also meeting and talking to great people. And it's great to see so many new Reals emerging from all over the world on various topics. It will be interesting to see where this all goes. In the mean time, I'll be sharing my journey whenever I can. 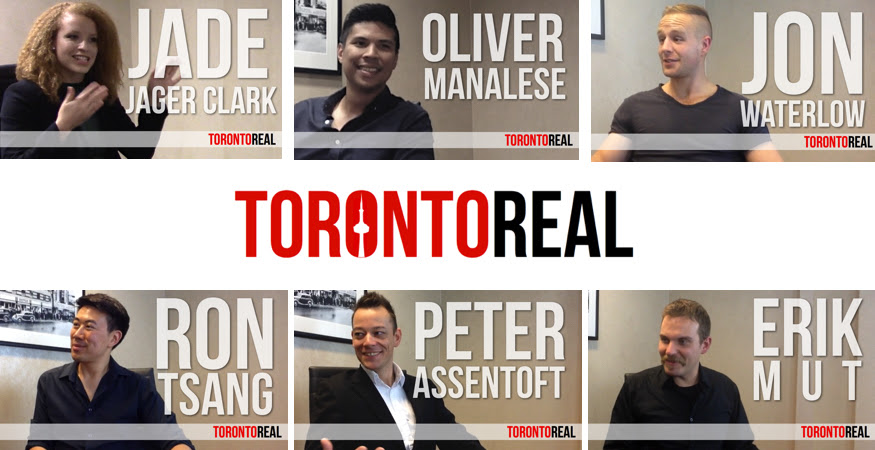 If you have an opportunity in your life at the moment that has the potential of making you grow and become a better version of yourself. Do it. What do you have to lose, really? If it doesn't work, you'll become wiser and will avoid wondering "what if" for the rest of your life. If it works, you get to be more. I would say that's a win-win,  don't you think?

Urban Sketching at the Museum of Inuit Art

It's always a bit of a challenge to find a new and interesting place to host an urban sketching event in the winter, specially as the group keeps growing. I tend to spend hours online searching for new places and planning the day around it. Fortunately I came across the Museum of Inuit Art and despite its relatively small size, it looked like there were quite a few interesting sculptures for everyone to sketch, so it was chosen as the first sketching destination for 2016.

I've always been curious to find out more about the culture and history of natives, as I find it's not a topic that is readily available to non-natives, so the fact that this museum exists definitely got my attention. What an awesome place! I love the modern minimalist design of the space which is a great backdrop for the intricate artwork in the museum. It is meant to evoke the ice flows, snow drifts and wind swept tundra of the Canadian Arctic, so that Inuit art can be appreciated with some sense of the environment in which it was created.

As the organizer, I often only have time for one good sketch, so after greeting the participants and taking pictures and videos of the space, I chose to sketch a piece from master sculptor Abraham Anghik Ruben called Beowolf, made out of Brazilian soapstone. It just captured my attention right at the entrance of the museum. The receptionist was amazed that I could stand there for an hour or so, just fixated on the sculpture. 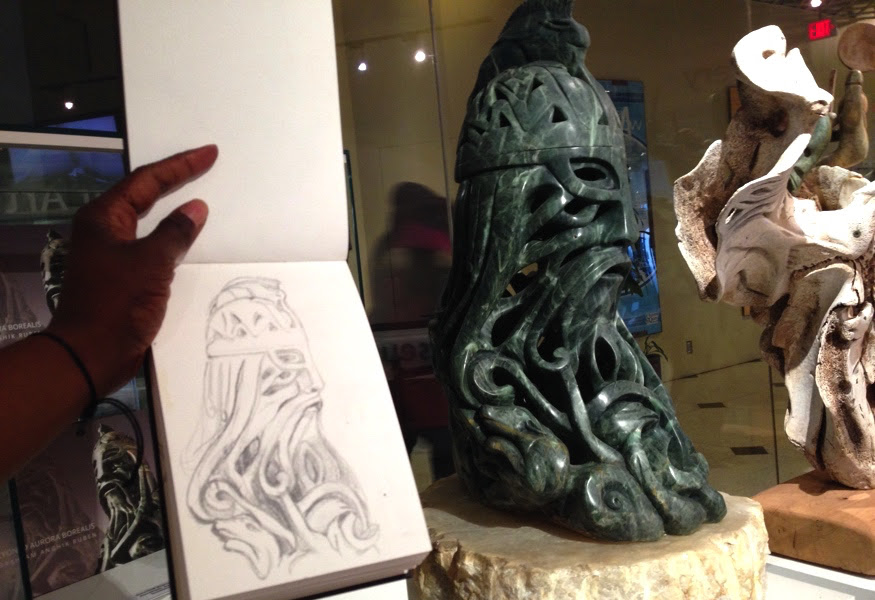 There's something interesting that happens when you start sketching something like this, at least for me. I get in some sort of trance where only me, my thoughts and the object I'm sketching exists and I start discovering all kinds of things I wouldn't have if it wasn't for essentially interacting with that subject. In the case of Beowolf, I was intrigued  by all its intricate parts and how the openings create intense contrasts. And then I noticed all the little creatures embedded in the sculpture like a mix between a rabbit and a chameleon on top of his head, a pig nestled on his side, a dolphin and a bird closer to the front, and other animals I probably missed on the other side.

I worked a little more on the contrasts and the details of my sketch, carefully noting where the darkest area were so that I could complete it later on at home, as I knew I wouldn't have enough time that day to finish it. Later on, I went over my drawing with a water soluble Inktense pencil . Using a water brush, I then increased the contrast of the sketch and added a green and blue wash over it.

We had a great turnout. A little over 20 sketchers took part in this event and many, including myself, plan to go back again in the near future. I also was made aware of two other places where we can see more native art in the city : the TD Gallery of Inuit Art and the Bay of Spirit Gallery. 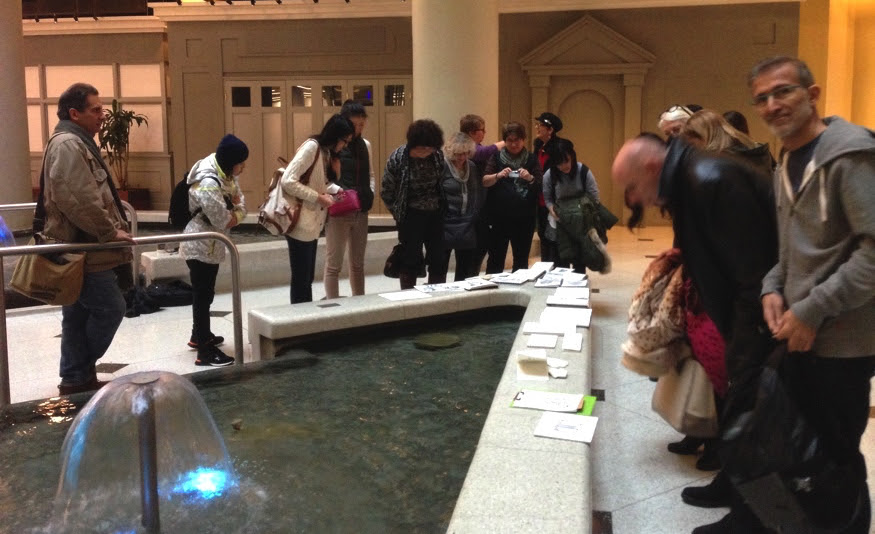 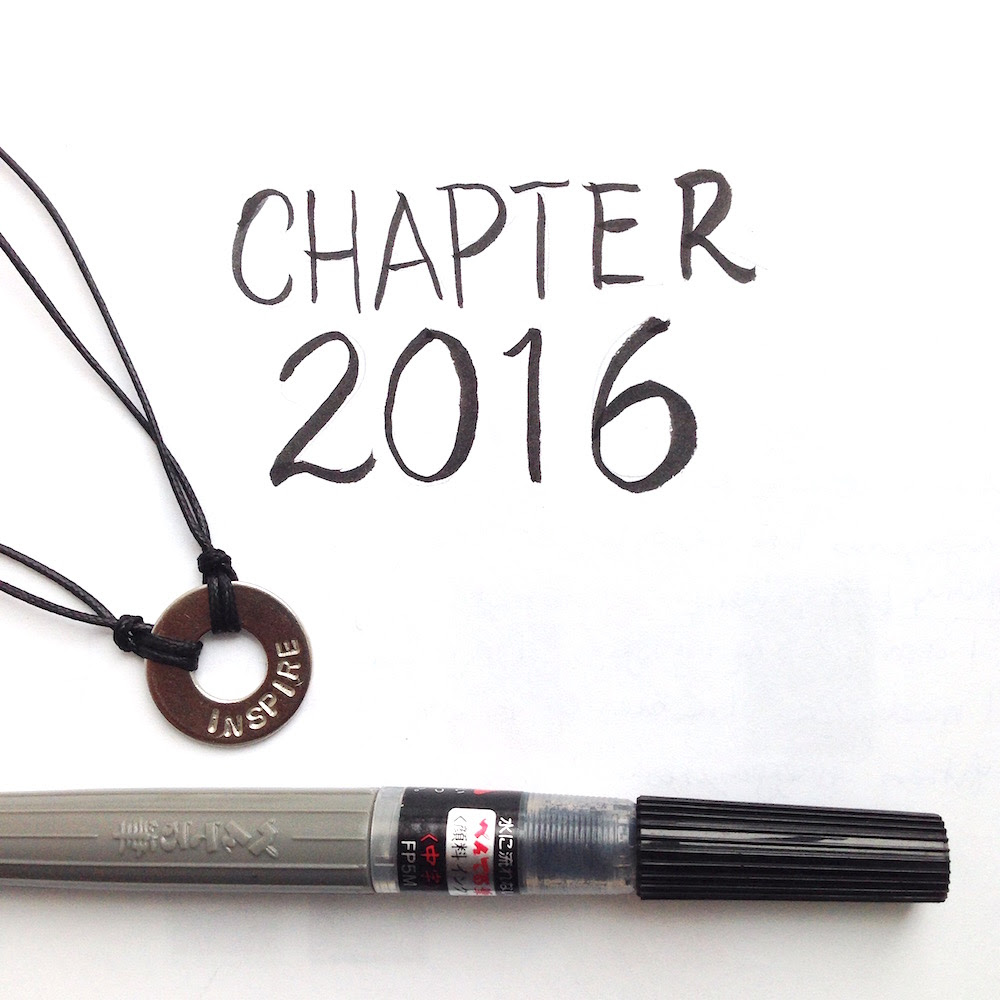 
It's been a while since I posted on this blog. Time to get back at it! I think I've been neglecting it because, for some reason, I was trying to fit into this mould of talking about only one topic. But I was doing so many different things in 2015 that my "solution" was to essentially censure myself. As a result, I didn't post much. Silly isn't it?

Meanwhile last year I did quite a few cool things including organizing the first field trip for the Toronto Urban Sketchers and our first art show at Areej Gallery, publishing our first collective book, publishing my first coloring book, making coloring videos, joining the London Real Academy, starting my own podcast on YouTube, achieving my reading challenge for 2015, attending various workshops, taking tons of pictures of my dog Newton, and much more.

This year, I'm going to do it my way and post about all of it, mixing all kinds of topics of interest, a bit like Leonardo DaVinci's sketchbooks. Actually, reading the book Work Like DaVinci convinced me that it's a good thing mix different subjects, so I'm re-designing my blog for that, starting with a new About page.

I hope you stick around and get something good out of this as well.