ANIMAL CONNECTIONS 005 : the cat made me do it 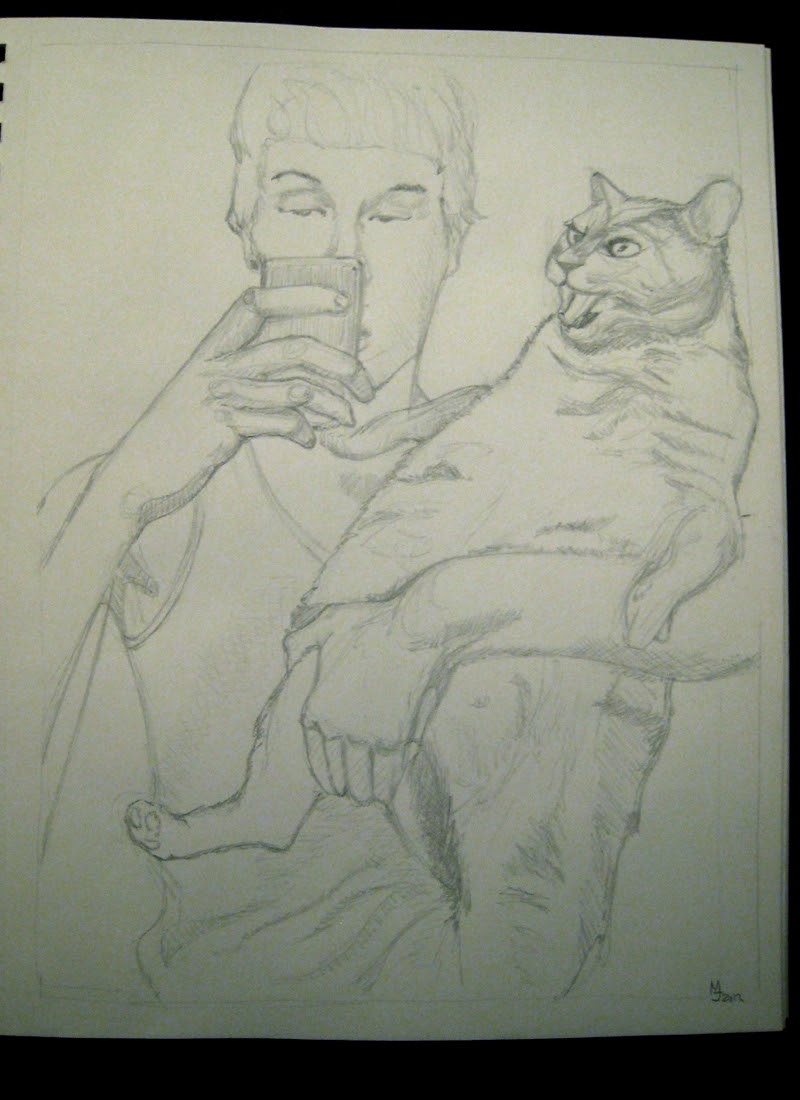 I'm finally starting to get over that annoying flu that's been seriously cramping my style over the past few days. So I decided to keep it simple and draw a portrait using only a pencil on a sketchpad. I just love the face expression on that cat.

Here's to a new year, full of new ventures, fun projects and creative outlets. Happy new year!
ON 31.12.12 No comments:

ANIMAL CONNECTIONS 004 : the magic of the holidays 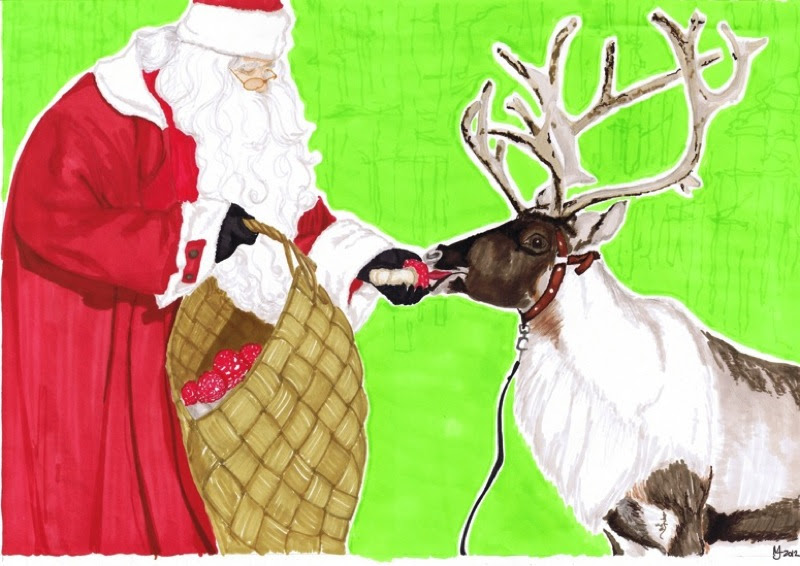 I was recently wondering about the origins of Santa Claus and the stories of flying reindeers, Rudolph with the red nose, the fact that Santa came from the north pole and used to go to people's houses through the chimney to leave gifts. Where does that come from?  Well I did a little research and it seems that the link might be magic mushrooms (Amanita muscaria).

These mushrooms, which typically grow under coniferous trees, are apparently sought after by reindeers who love to eat them. Also, Shamans in Siberia used to collect them, dry them on trees and give them as gifts during the winter solstice. The more I looked into it, the more links there seemed to be.  Quite a fascinating find, and what inspired this drawing. 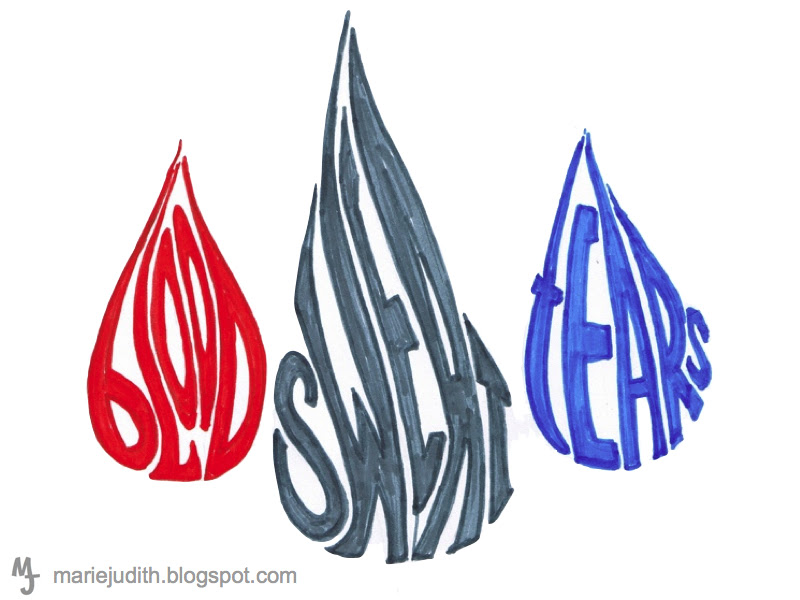 I've come to the realization that any widely successful person, no matter the field they're in, got there through blood, sweat and tears. So in order to be successful, you most likely have to go through it as well. Recently, I got this idea of representing this idiom with three drops made out of the words "blood", "sweat" and "tears" and came up with the rough drawing above. 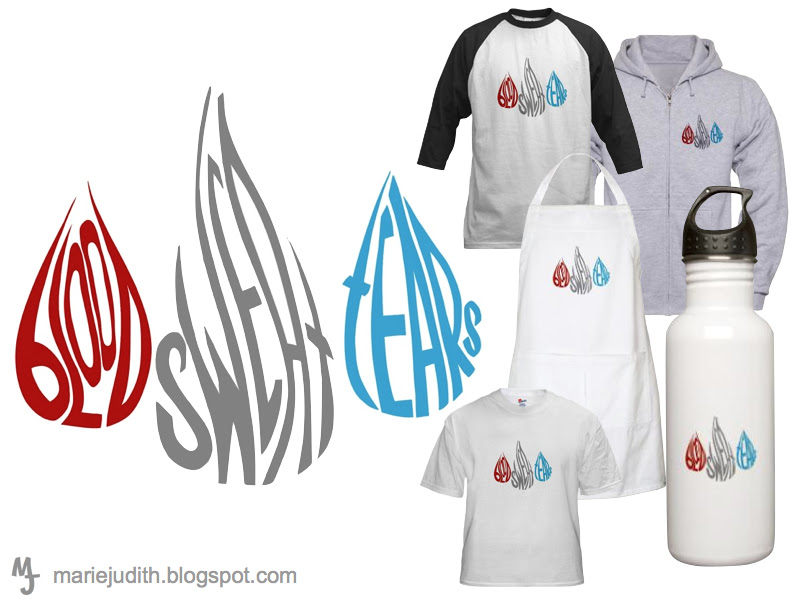 I always thought it would be neat to have my drawing on various products but never really went past the idea phase until now. I recently decided to join Cafe Press and test out some of my ideas. I'm still waiting for the legal approval for the items to be available online, they should be available for sale very soon. Hopefully it will inspire and encourage people who are looking to achieve difficult tasks in their lives : be it loosing weight, becoming a chef, graduating, making a sports team, starting a new business, building a new life or recovering from an addiction.
ON 22.12.12 No comments:

ANIMAL CONNECTIONS 003 : kiss from a seal 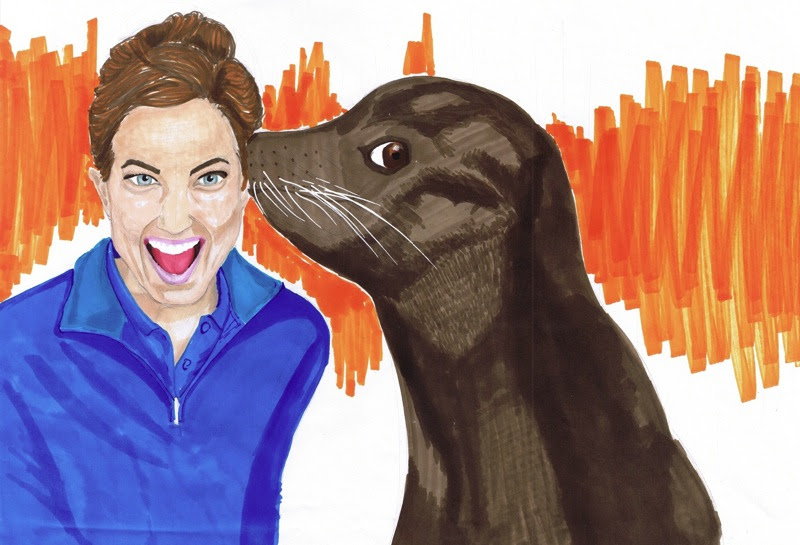 All I could think about while drawing this was the song "Kiss from a rose" by Seal, which inspired the title for this post and most likely the background that looks like a soundwave.
ON 19.12.12 No comments:

ANIMAL CONNECTIONS 002 : an eagle on his arm 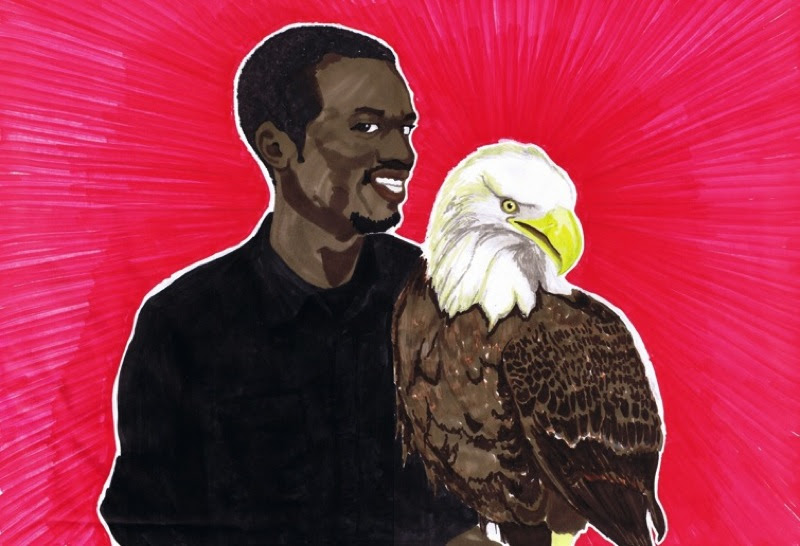 I'm fascinated with eagles, especially bald eagles. They are such majestic animals. I came across this domesticated one, name Challenger. Who fell off his nest when he was a baby and raised by humans who found him and who thinks he's a person too. After too unsuccessful attempts to release him to the wild, he became the ambassador to his species and now belongs to the American Eagle Foundation.

I love the idea of animal ambassadors protecting and speaking for their own species. Imagine if we found ways to truly communicate with them so they would be part of the United Nation...
ON 18.12.12 No comments:

ANIMAL CONNECTIONS 001 : a rat on her shoulder 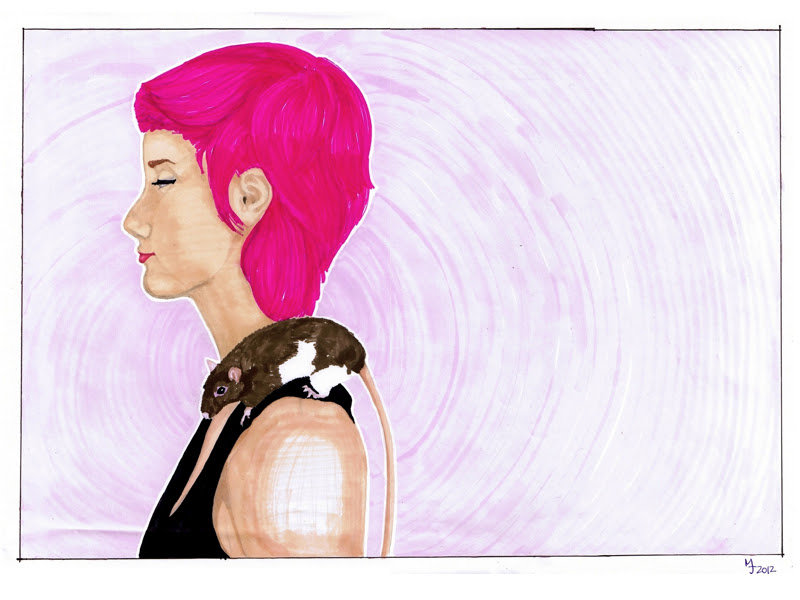 I'm challenging myself to start a new series of portraits on the topic of people and their pet. I even came up with a title : Animal Connections. The goal is to produce 100 of them (OMG... sounds scary) and this is the first one. I'm using a Bleedproof Market Pad from Letraset that has been sitting on my shelves for years. I'm glad I'm finally making use of them.
ON 17.12.12 No comments:

READ IT - The War of Art: Winning the Inner Creative Battle

Title : The War of Art: Winning the Inner Creative Battle
Author : Steven Pressfield
Format : Audiobook
Summary : What keeps so many of us from doing what we long to do? Why is there a naysayer within? How can we avoid the roadblocks of any creative endeavor—be it starting up a dream business venture, writing a novel, or painting a masterpiece? The War of Art identifies the enemy that every one of us must face, outlines a battle plan to conquer this internal foe, then pinpoints just how to achieve the greatest success. The War of Art emphasizes the resolve needed to recognize and overcome the obstacles of ambition and then effectively shows how to reach the highest level of creative discipline. Think of it as tough love . . . for yourself

Why this book ? : This book came highly recommended by Joe Rogan during one of his podcasts. I forget what they were talking about, but he was raving about this book and how all artists should read it because it helps you to actually get over things like writers block. He mentioned it more than once, so I had to check it out.

My Review : I absolutely loved it! I listened to it two times and probably will listen to it again and take some notes. Not only did I relate to the stuff that he was saying about resistance, but from my observations of various successful and unsuccessful people, I could see the pattern that he was talking about. The talk about muses and angels might make some people uncomfortable, but if you're open minded the information you'll get from it is in my opinion very valuable.

Favorite quotes and notes from the book

Most of us have two lives. The life we life we live, and the unlived life within us. Between the two stands Resistance.

It was easier for Hitler to start World War II than it was for him to face a blank square canvas.

The artist is grounded in freedom.

Fundamentalism is the philosophy of the powerless, the conquered, the displaced and the dispossessed.

The professional loves it so much he dedicates his life to it. He commits full-time.

The Ego hates artists because they are the pathfinders and bearers of the future.

Creative work is not a selfish act or a bid for attention on the part of the actor. It's a gift to the world and every being in it. Don't cheat us of your contribution. Give us what you've got.

Check out my Readings page to see my virtual library and more book reviews
ON 16.12.12 No comments:

Email ThisBlogThis!Share to TwitterShare to FacebookShare to Pinterest
Labels: readings 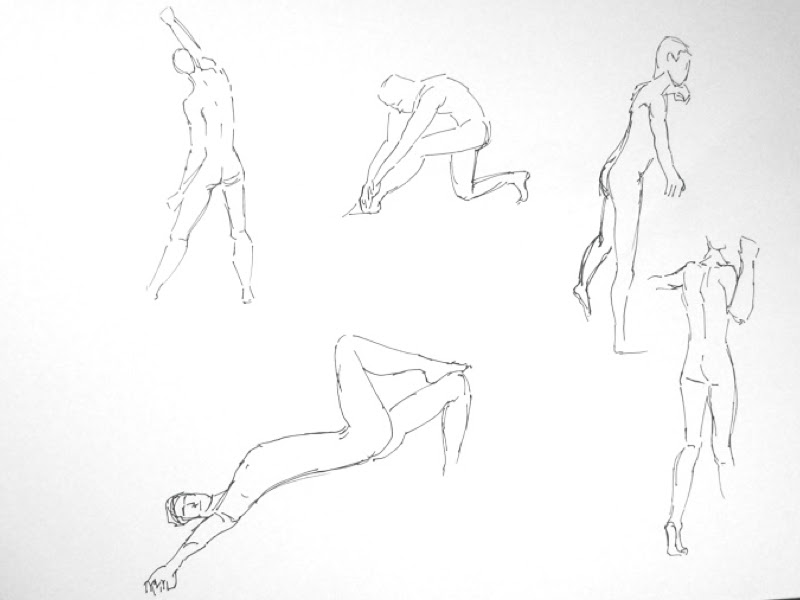 This week's model had really good 90 second gestures (shown above). I decided to use a marker instead of a pencil for this portion. I find it changes the way I draw, perhaps because I know in the back of my head that I can't erase it, I'm more thoughtful of where I draw.

For the longer poses, my best rendering this time for me was the third one. Mind you I can see areas where I can improve, but I like the shading, hair, proportions, etc.

The best pose from the model for me was the last one : The most difficult one. It's crazy to think he held that pose for almost half an hour. It's too bad I didn't have time to draw the face properly... 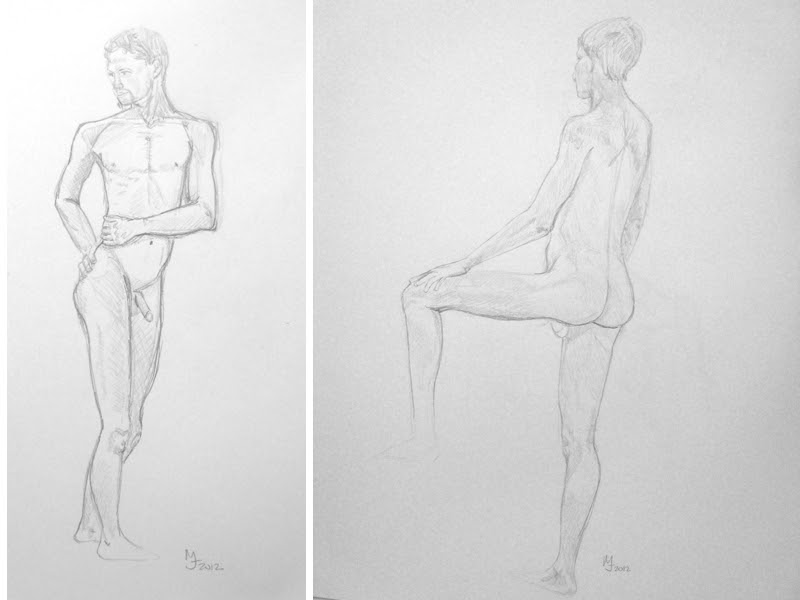 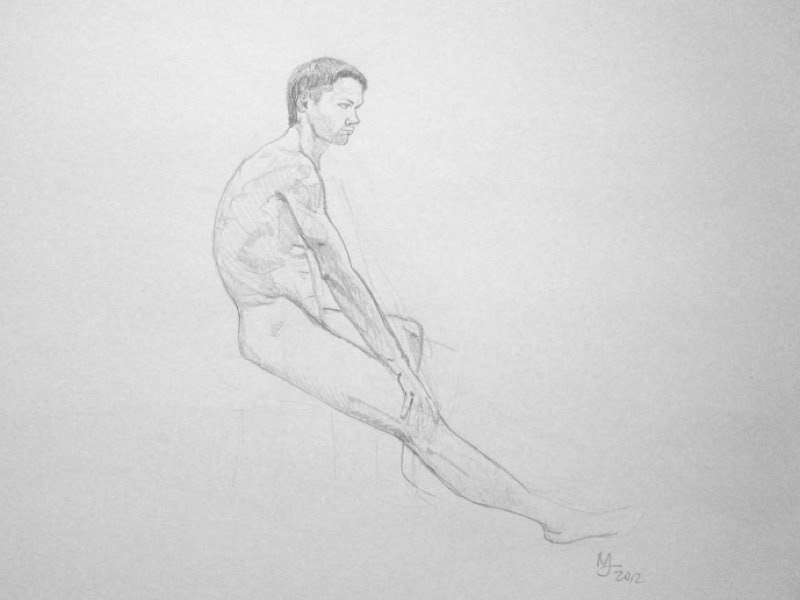 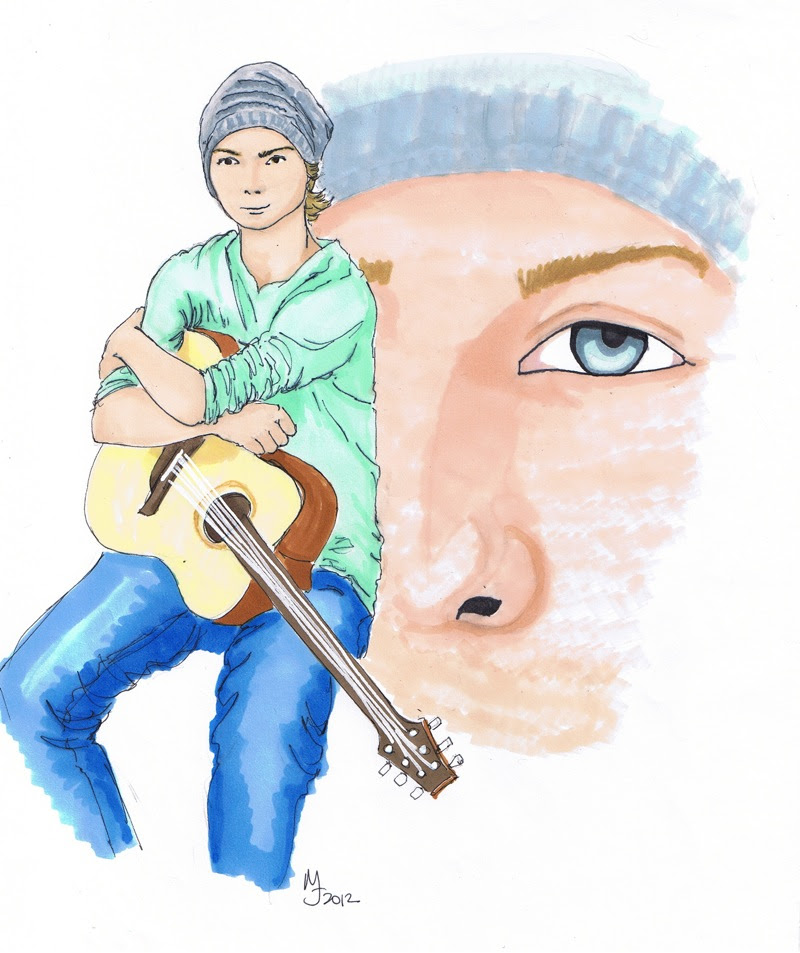 This redditor wanted an album cover illustration. This is what I came up with.
ON 13.12.12 No comments: 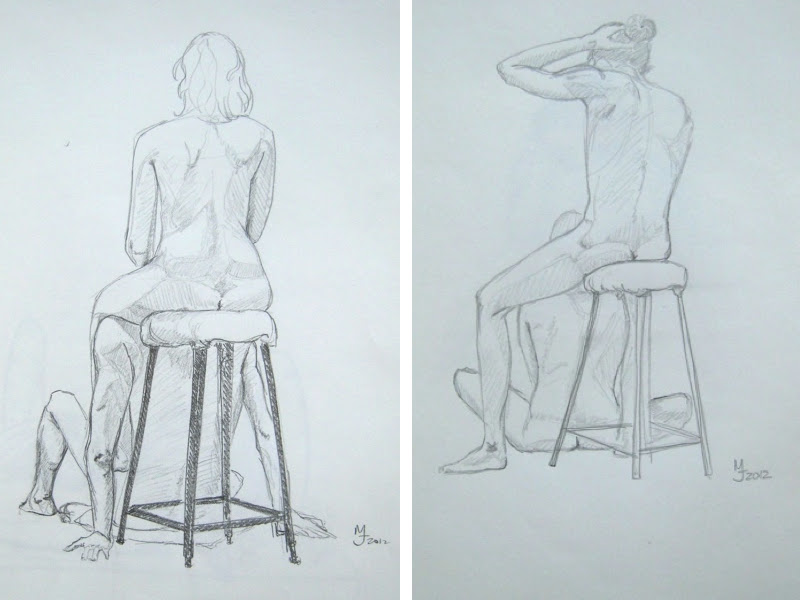 and then there were 50 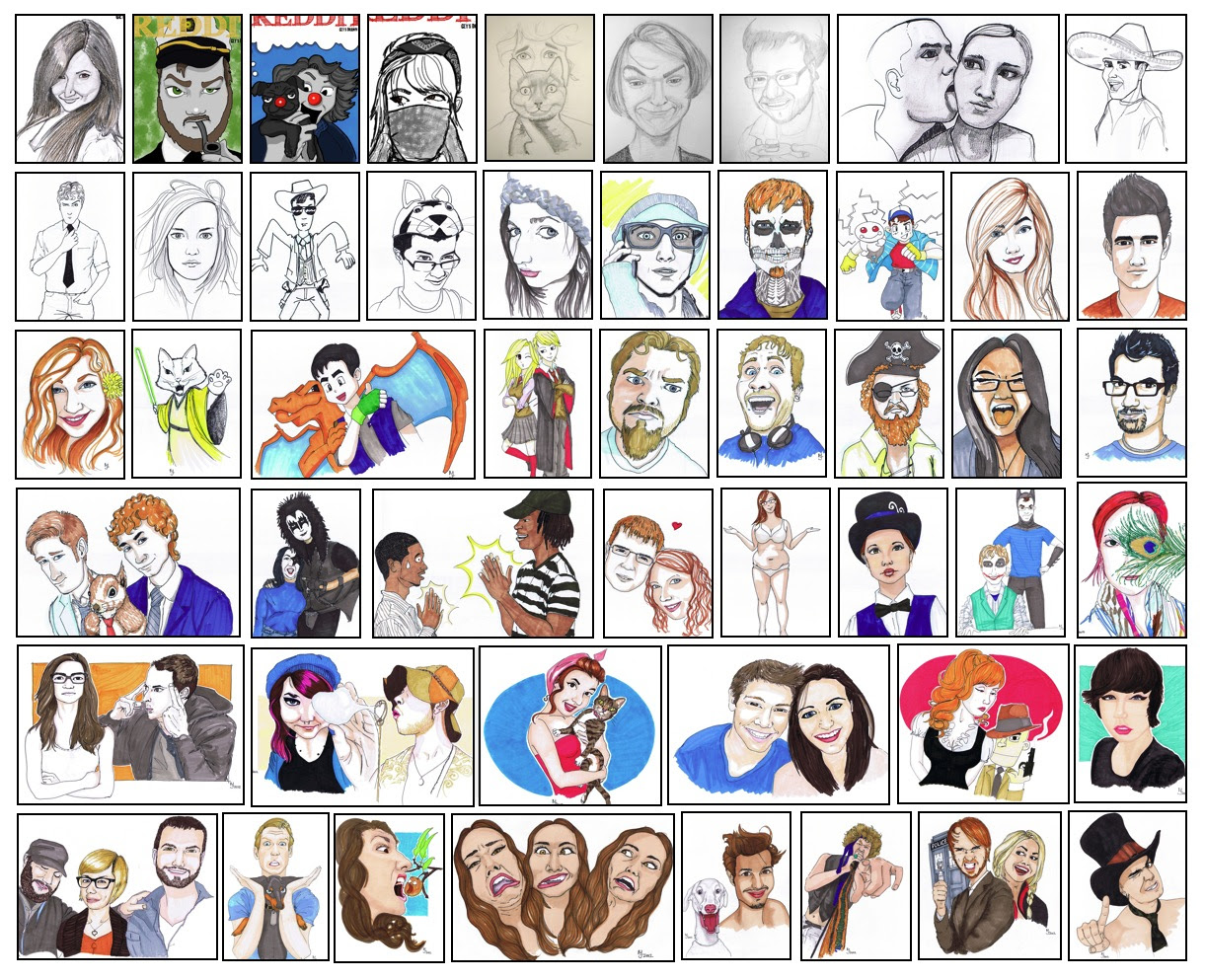 A couple months ago, I gave myself the challenge to complete 50 Reddit Get Drawn portraits in order to get back into drawing and work on my skills, and I recently completed that challenge. It's fun to see the evolution. The more I drew the more I realized that I like to use markers. After posting them on reddit, I also completed two bonus request, shown below : 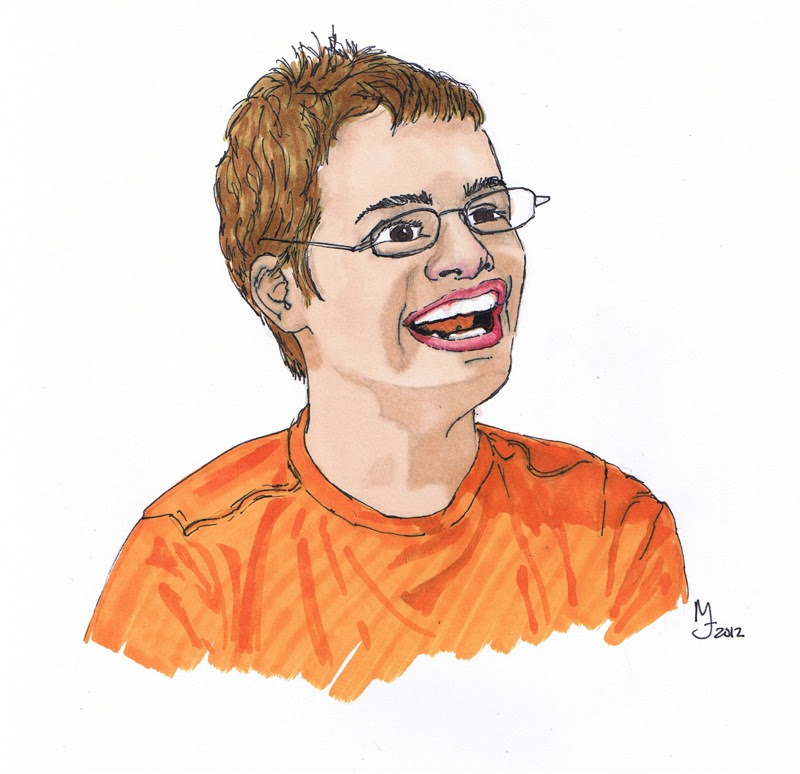 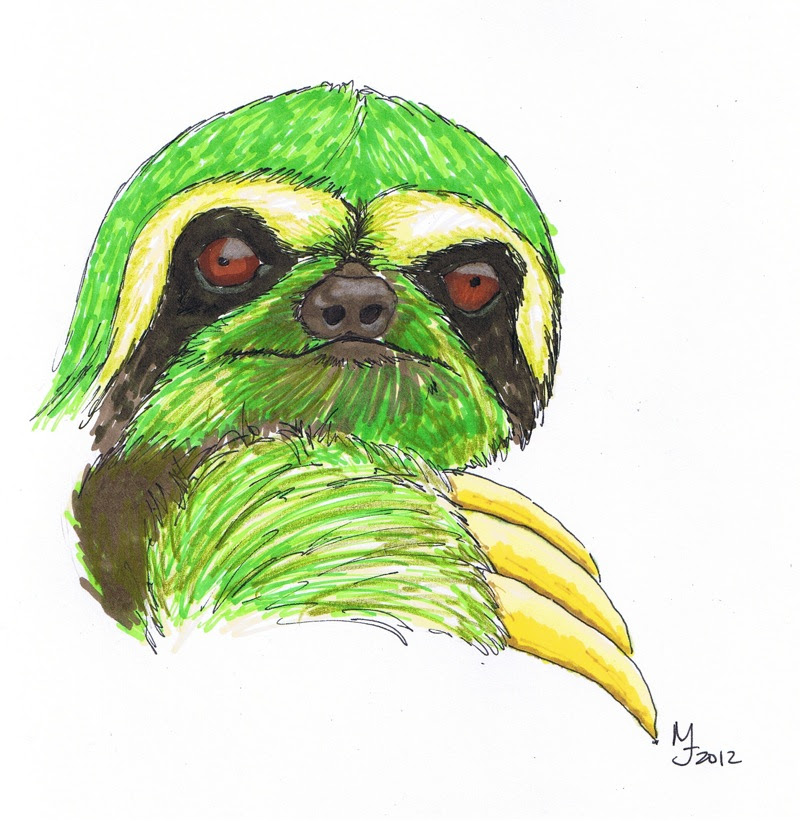 a tie and a hat 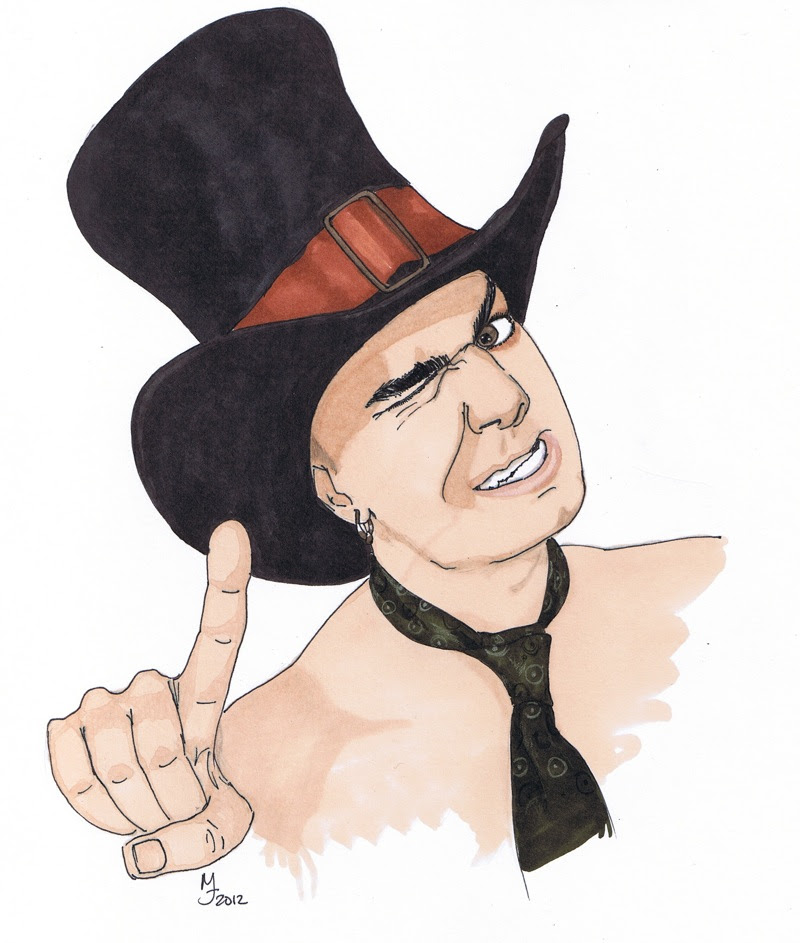 This request had a couple photo choices but the one with hat and that face expression was the winning on for me. 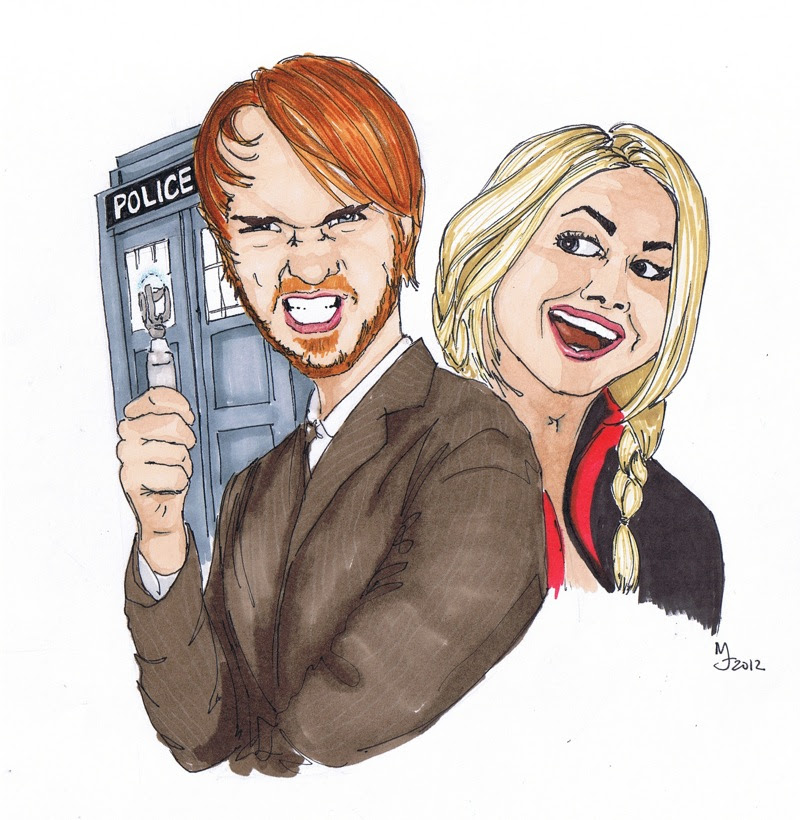 This redditor's request was a little more involved. He wanted to be portrayed as The Doctor with a Tardis, a sonic screwdriver and Rose Tyler. I'm glad a managed to add everything in :)
ON 4.12.12 No comments: