Monuments and Memorials in DC 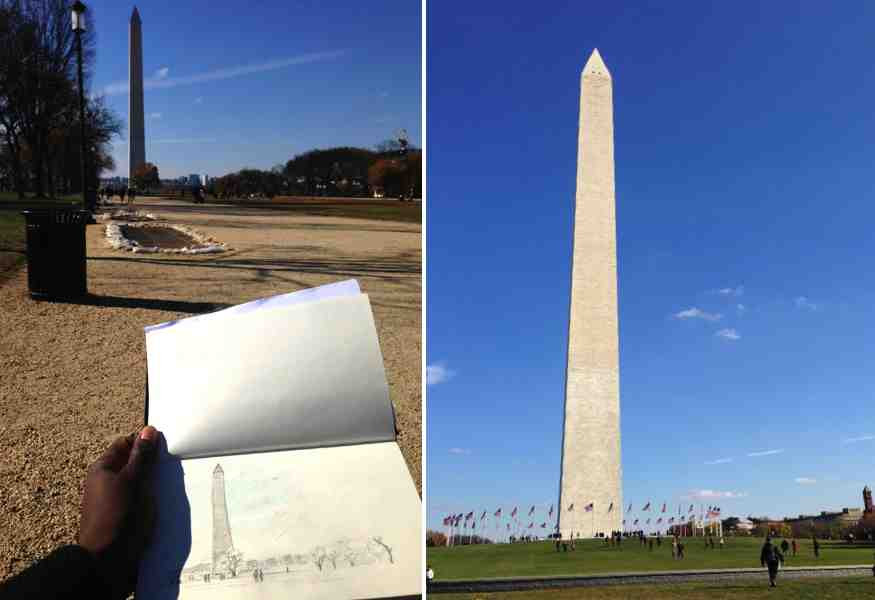 The first place I visited while in DC was the Washington Monument. Right out of the Smithsonian subway station, I had a great view of the monument. It wasn't too cold so I sat on one of the benches to do a quick sketch. It's a rather simple structure to sketch, so it didn't take too much time. I finalized the colours in the hotel room later on so that I could visit as much as possible while I was there that day. 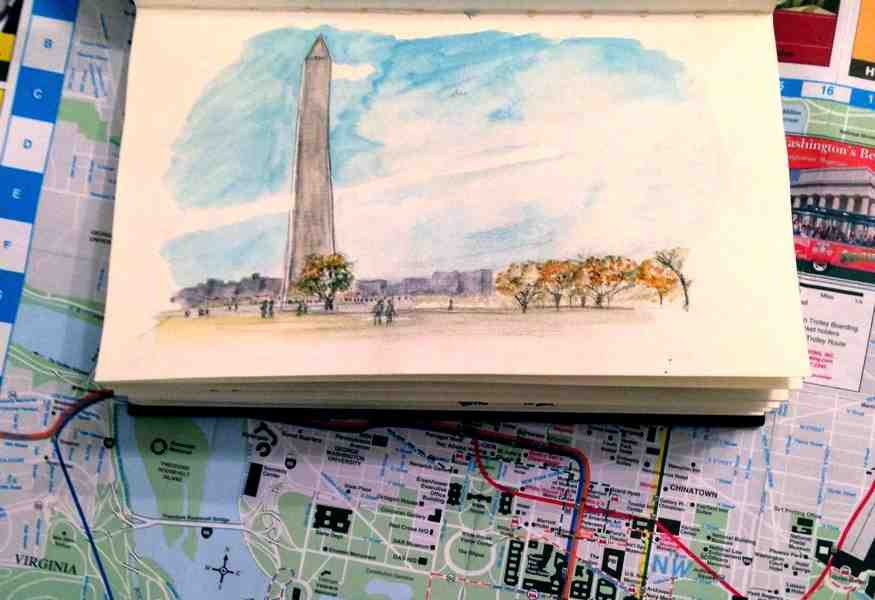 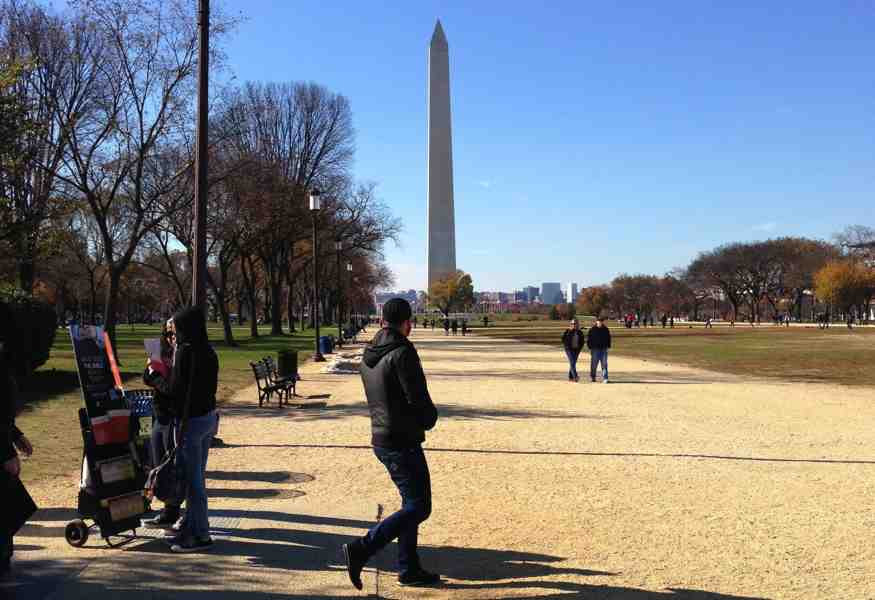 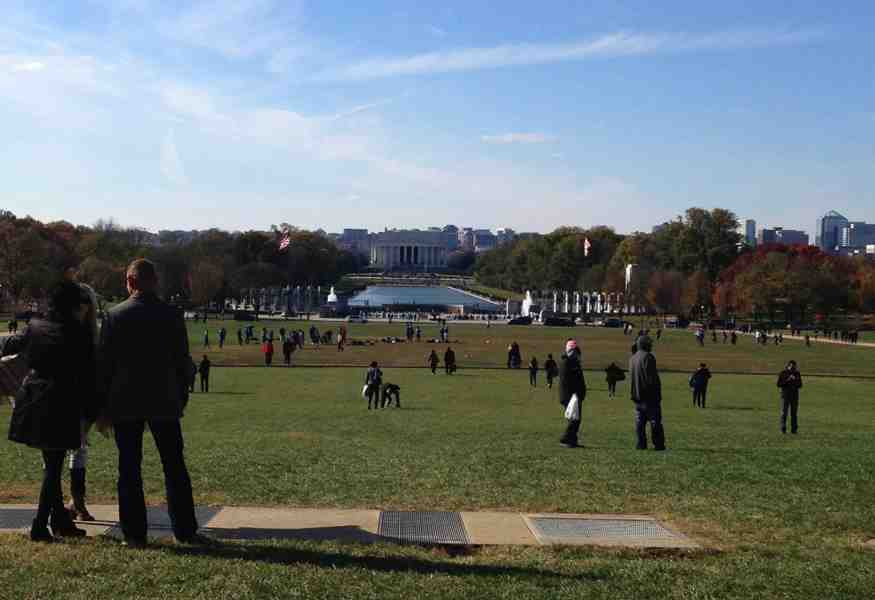 The site is HUGE! It took a little while for me to get to the Washington Monument. It is very well designed with American flags perfectly surrounding it. Many people were taking all kinds of pictures around it. I think you can also visit inside for a fee and get a view from the top. There are two little windows on top that are lit with red lights at night. Hopefully I'll get a chance to go up there next time.

From the site of the monument, I could see the Lincoln Memorial and I wanted to go check it out.  So I started the long walk toward the Memorial, shown above from the Monument, with the World War II Memorial and the Reflecting Pool in between.

I stopped at the WWII Memorial for a couple quick photos. It's obvious that a lot of care was put into designing and building the WWII Memorial. There was a lot of great details and a beautiful fountain in between. I could have easily stayed a couple hours to sketch there, but I really wanted to go see Lincoln, so after a couple photos, I headed to there. I walk, and walked and walked and finally made it passed the reflecting pool (which is gorgeous) and finally got to the bottom of the stairs leading to the Memorial. It was like some sort of pilgrim. 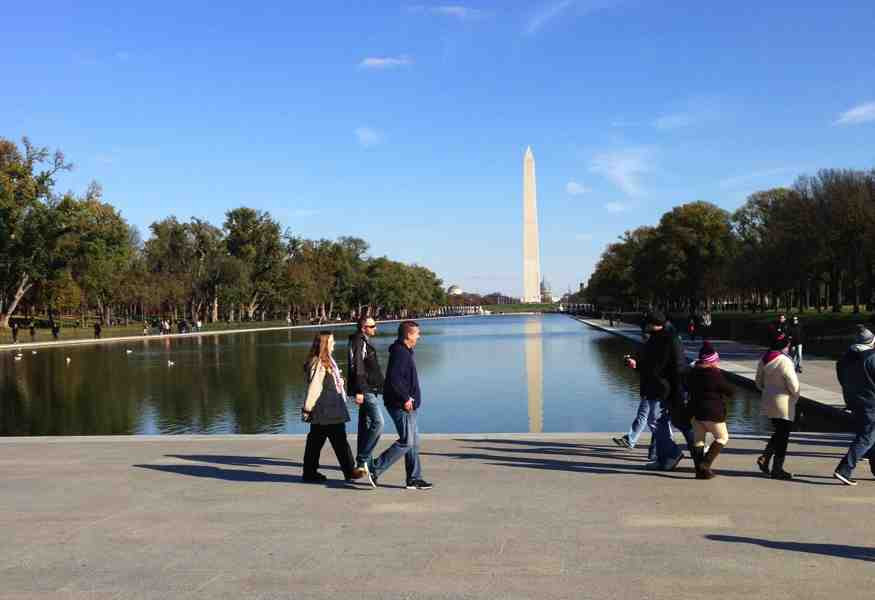 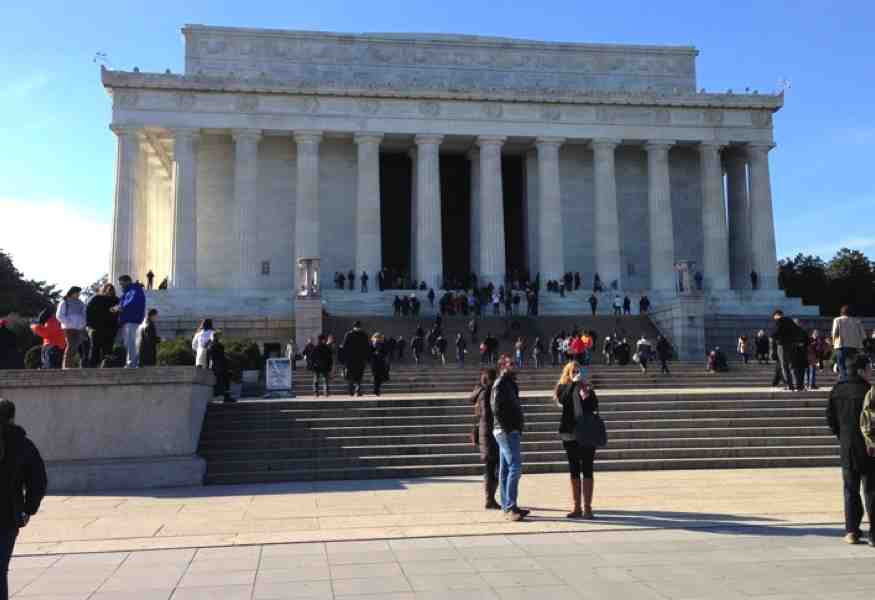 Again, there was a lot of people in and around the monument. The Lincoln statue is huge. It was getting a little cold by the time I got there but I still did a quick sketch before heading back. The walls surrounding Lincoln had great quotes on them. I also notice how it looked like Lincoln was depicted as ready to get up from his chair. His right hand was relaxed, while his left hand was tense, looking straight ahead towards the Washington Monument. His view must be quite something. Apparently, it's great to see the monument lit up at night. Perhaps I'll get another chance to visit it, hopefully in the summer. You can easily spend two days visiting this area. I didn't get a chance to see the Vietnam Veteran Memorial, the Korean War Veteran Memorial, the DC WWI Memorial, the Einstein Monument, the Martin Luther King Monument, the Jefferson Memorial, and many more attractions in this area. 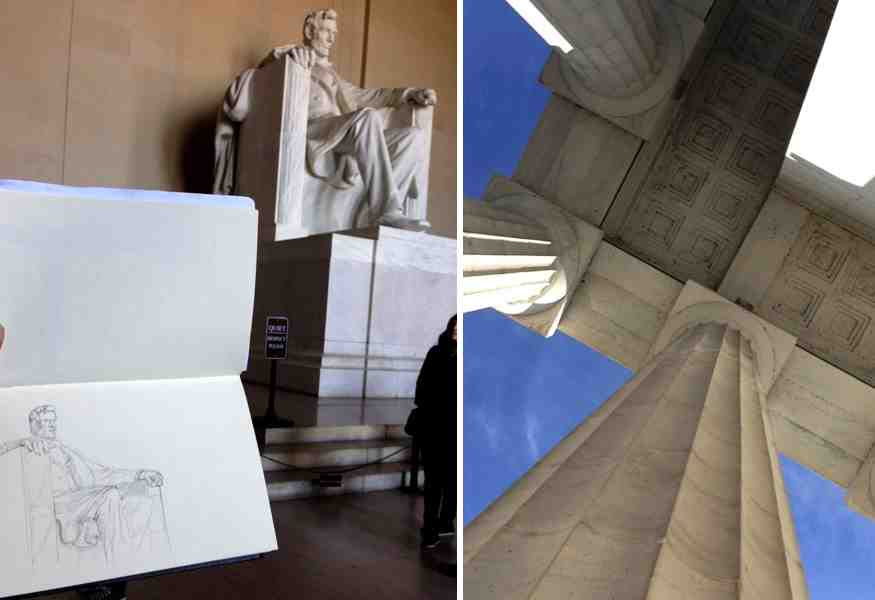 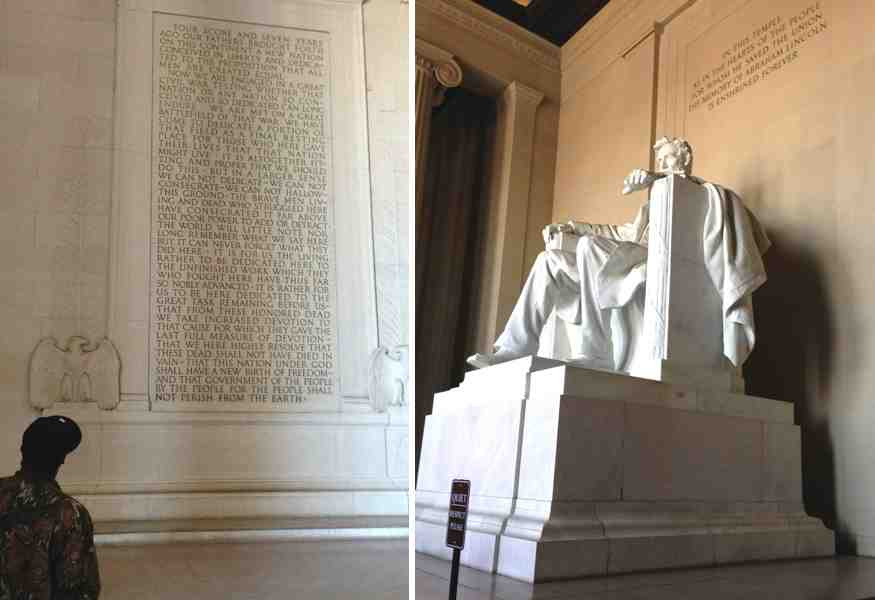 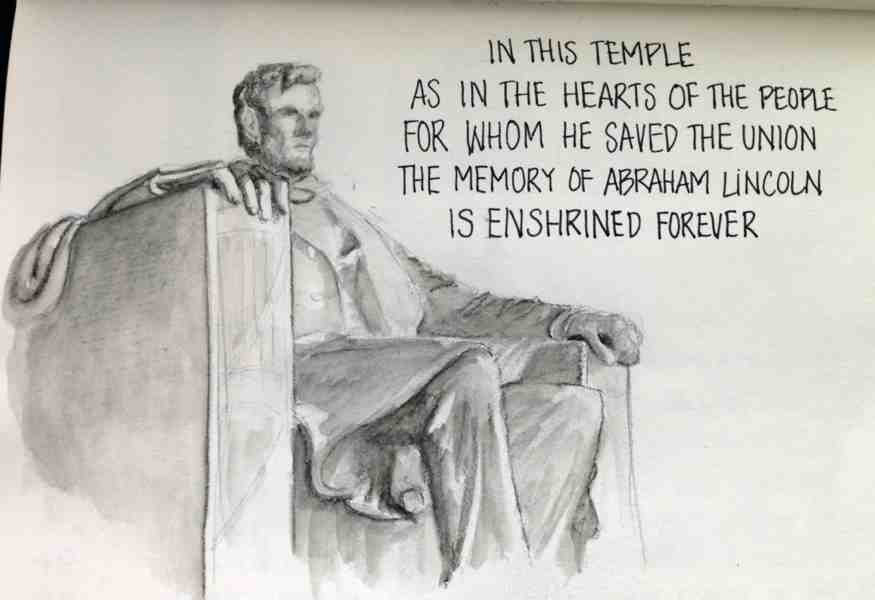 Sketching on the way to Washington DC 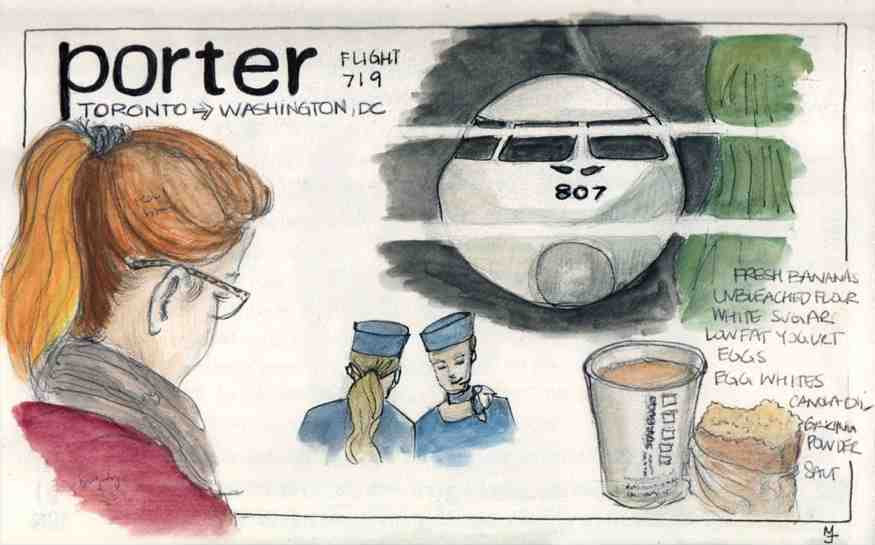 I had the opportunity to visit Washington DC, for the first time last week and brought my sketchbook and sketching tools along for the trip. We had an early flight with Porter (one of my favourite airlines), so while we were waiting in the lobby, I started sketching one of the planes waiting to be boarded.

Soon after, we boarded our the plane, I did a quick sketch of one of the passengers on her laptop. A lot of the passengers on our flight were going to a convention. I also sketched our flight attendants. I really like their uniforms, they always look sharp. We were offered a choice of a light complementary breakfast snacks since our trip was only about one hour long.  I opted for the Starbuck coffee and the delicious banana bread made with all natural ingredients. Great way to start the trip. 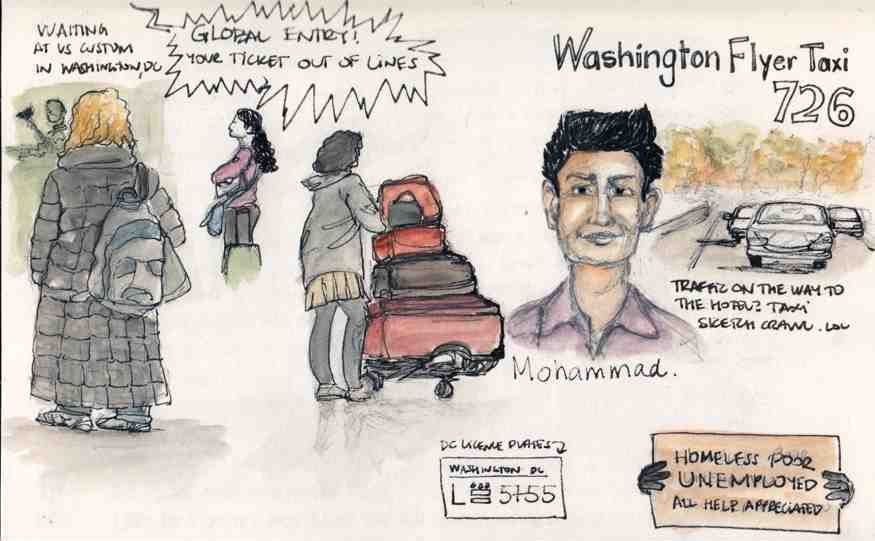 Once we arrived at the airport, we had to wait in line a little to get thought custom, but it didn't take too much time especially for people with Canadian passports. While waiting, I did a quick sketch of some of the other people waiting in line and then we were off to a one-hour taxi drive to our hotel. There was quite a bit of traffic so I sketched what I could see from the back of the taxi cab. It was quite something to see the elaborate setups of some of the homeless people outside of DC.
ON 27.11.14 No comments: 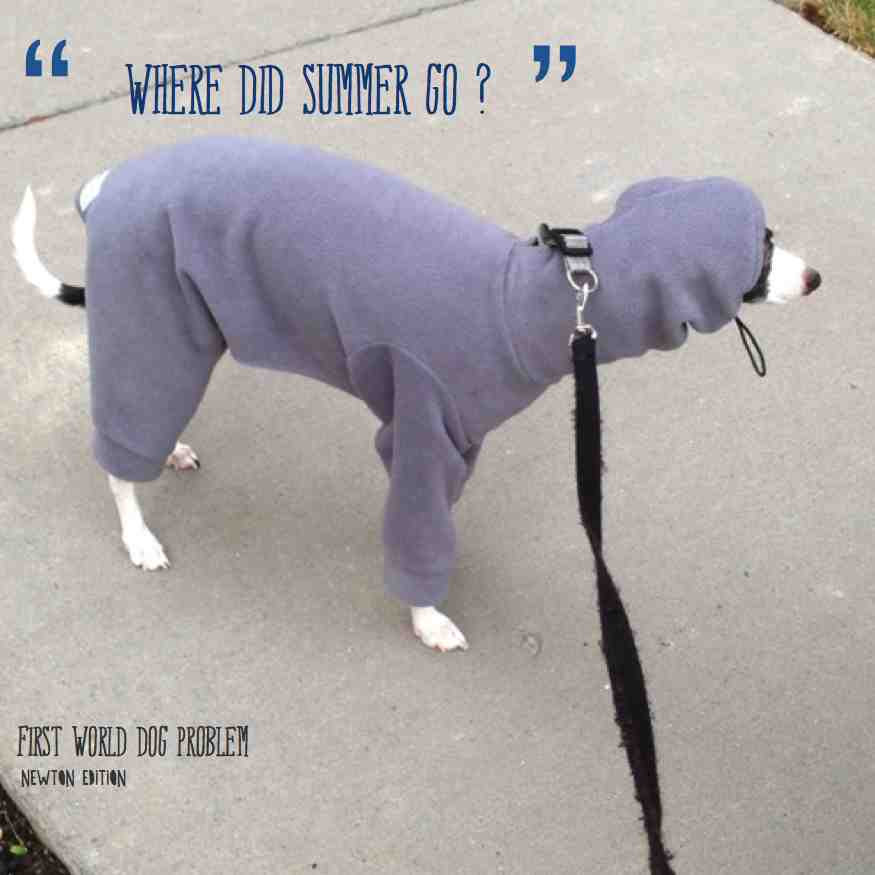 Email ThisBlogThis!Share to TwitterShare to FacebookShare to Pinterest
Labels: 52 A Portrait a Week, Italian Greyhound 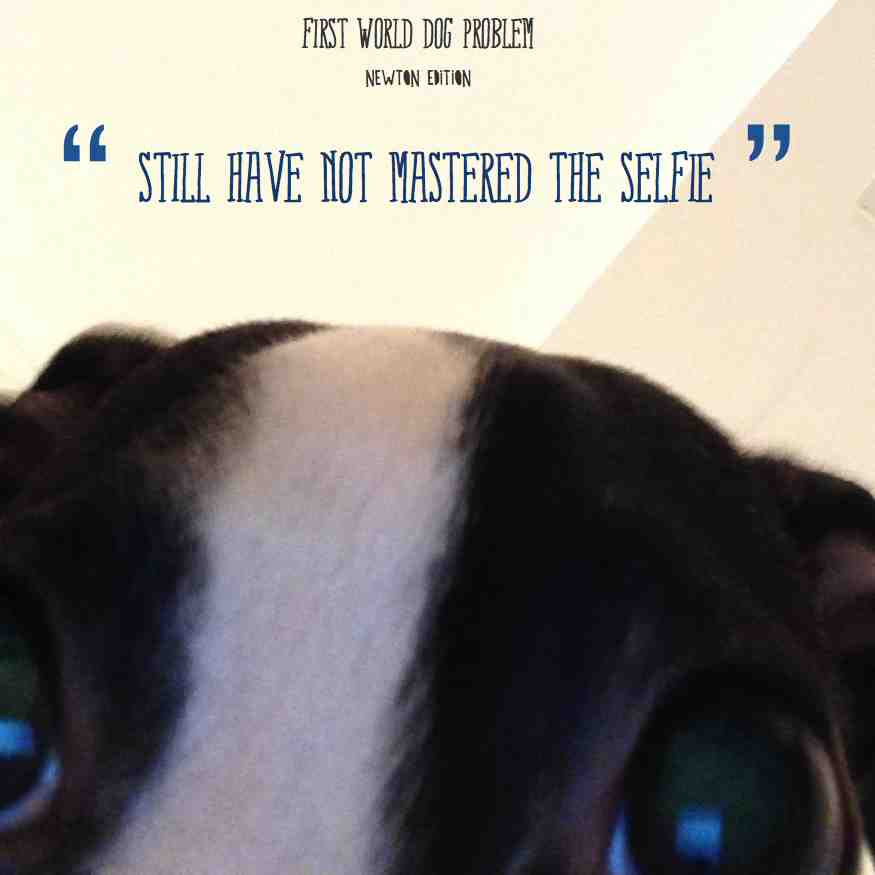 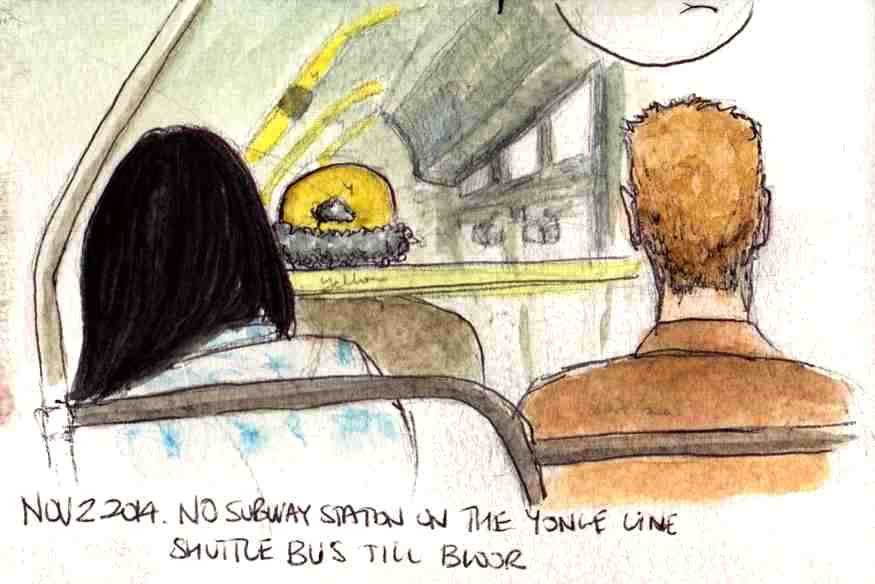 With all the construction going on on the subway line, I often have to take a shuttle bus instead to get to town, especially on Sundays. It's a little inconvenient, but at least there are shuttle buses and this time there was enough space to sit, so I decided to sketch some of the people in front of me. It's interesting to see how strangers sit next to one another sometime. In this case, the girl on the left was sitting as far away as possible to the guy on the right. I think she was so preoccupied by her phone, that sitting comfortably was not even a question. A older man was standing right near the door in front of them, I really like the contrast of his bright yellow cap and his fluffy grey curly hair.

Speaking of sketching in public transits, Sketching the Line, an international exhibition of sketches of commuters by commuters, will be happening again next year. Earlier this year, Art In Transit featured 78 sketches drawn by 18 artists on screens in various Toronto subway stations, the Edmonton LRT, and the Calgary Airport. Some of the participants included fellow urban sketcher Richard Alomar and Jason Das from New York, as well as local artists Bobby Chiu, founder of Imaginism Studio.

Art In transit is currently looking for more sketches for their second exhibition. The deadline to apply is January 31, 2015. If you're interested in participating visit their website to find out more.
ON 6.11.14 No comments: 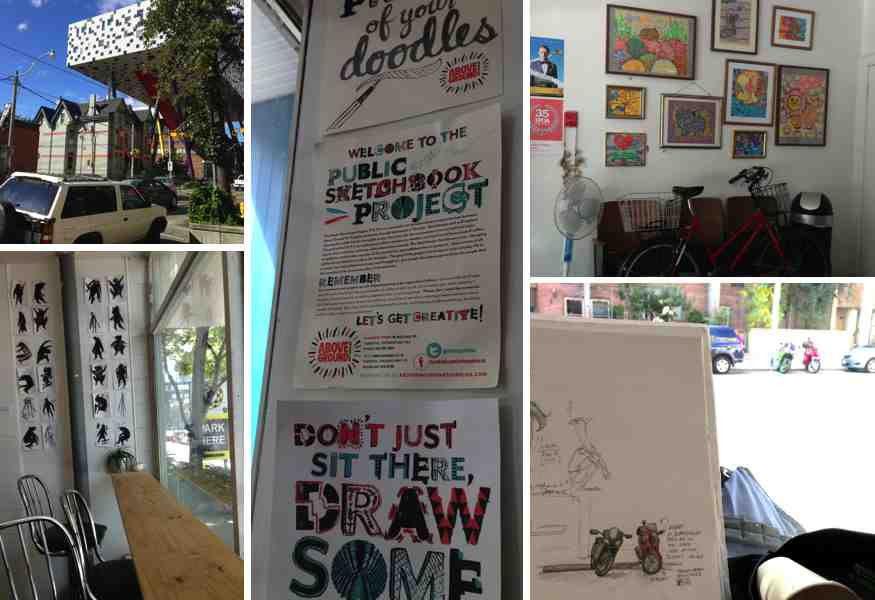 A couple weeks ago I discovered this neat little project curated by Above Ground Art Supplies store called the Public Sketchbook Project. They a sketchbook and all kinds of art material in various local coffee shops for people to sketch while they're having coffee. There was all kinds of interesting artwork in there already and I decided to add a little sketch of my own of the view from where I was sitting and a shameless plug for our sketching group. 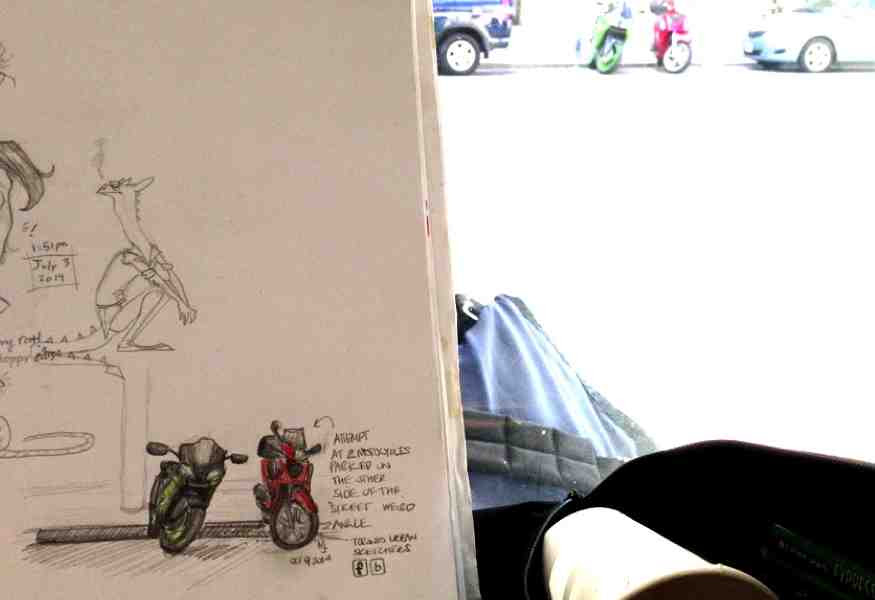 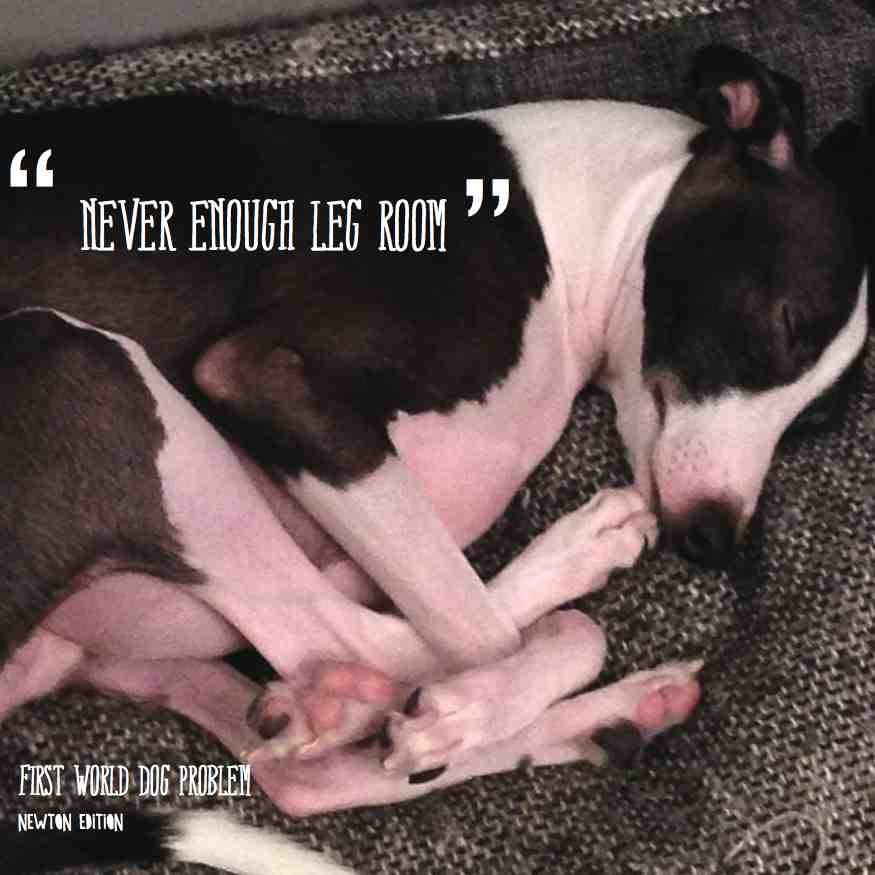 Karaoke at The Office Pub for Halloween 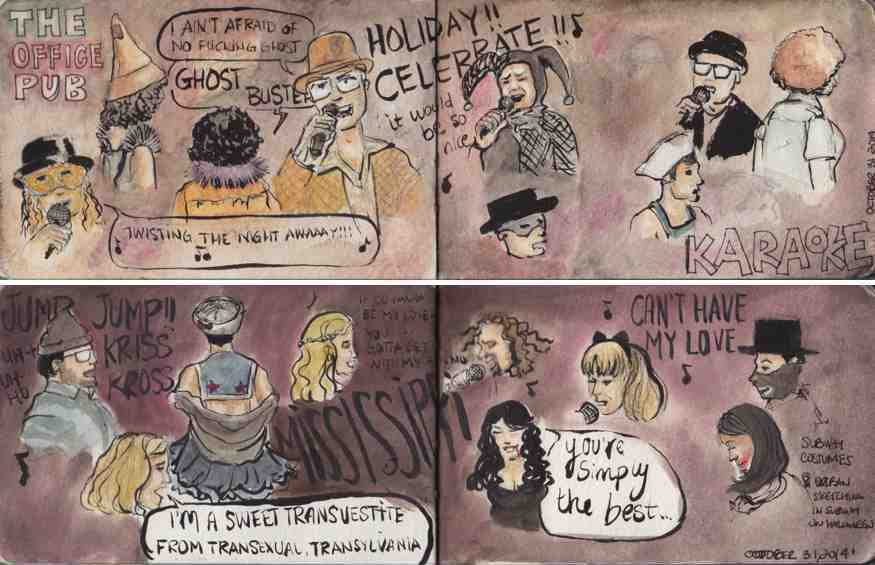 What I love most about Halloween is seeing people's costumes. This year, I joined a couple friends at the Office Pub on the third floor where they host a karaoke session. It was a great opportunity to sketch colourful characters in a party atmosphere. I was able to capture a fraction of the costumes that were created for the occasion, especially while they were singing their favourite songs. On my way back home in the subway, there was also a couple interesting characters riding the train. How cool would it be to spend a couple hours sketching costumes in the subway for Halloween next year? I think I need to plan that for next year.
ON 2.11.14 No comments: