I recently applied to a call for artists where we were asked to submit a piece of art under the theme : "Black Joy is resistance". It was an opportunity to explore what that means to me and try something a little different, as shown above.
I've always been interested in the arts. Growing up in a Westernized society, the system introduced me to what they deemed as the best classic works of art from artists like : Picasso, Van Gogh, Mucha, Michelangelo, Monet, Da Vinci and Dali. I had my favourites, but the white elephant in museum rooms was the fact that very few of the paintings had people who looked like me, and most of the time when they did, they were depicted in an unfavourable light (eg. Olympia by Edouard Manet). Once again, there was no "role models" to aspire to  for girls who looked like me. I didn't get the privilege to aspire to be like one of the women in paintings who were considered beautiful, feminine, graceful like in paintings like Birth of Venus, Mona Lisa, or Girl with a Pearl Earring. It's like we didn't exists and we didn't matter. But upon further research as I grew older and found out more about art history, I realized that it's not that we weren't there or unimportant, but we have, and continue to be, purposely removed and omitted from the main narrative.
There are classic paintings depicting women of colours in a positive and inspiring light. For example I recently discovered The Four Rivers of Paradise by Peter Paul Rubens painted in 1610. The melanated woman in this painting is clearly at the same level as her counterparts, enjoying the company of everyone involved; not in servitude to them.
There's also a fresco by the famous Michelangelo in the Sistine Chapel called "The Ancestors of Christ : Jacob, Joseph" where you can clearly see a beautiful melanated woman to the right, with a very unique afrocentric hairstyle adorned with what looks like pearl and wearing a lilac outfit. Her body posture is also refined and feminine. Seeing images like this as a child would have made a huge impact on how I see and express myself in the world. It also would have help other kids from various ethnic backgrounds to see a more complete image of people with a darker complexion and probably would have considerably reduce incidences of prejudice and microaggressions. 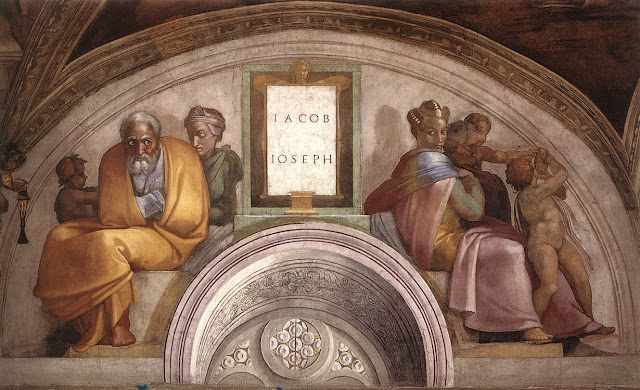 The Ancestors of Christ : Jacob, Joseph by Michelangelo, 1512 Source : Wikipedia
Just imagine how different the public's reaction to "ground breaking" shows like Bridgeton depicting a diverse cast of actors in wealthy roles would have been if they had grown up seeing paintings like Simon Maris' 1905 portrait of a young melanated woman with natural hair just sitting pretty and poised on a chair, called Isabella. It would not have been so shocking to see wealthy people of colour on screen and there wouldn't need to be any debates regarding whether or not  a diverse cast in a fictional story set in that time was "historically accurate".
The AGO also recently acquired a 1770 painting from an artist named Jeremias Schultz, showing another melanated woman adorned with jewelry, silk dress. Clearly not poor, not a slave, not in servitude during the Georgian era. All throughout my schooling, I never thought this was possible, but the more I did the more I uncover that we had a place there too. The public story has been told from a very narrow and discriminatory point of view. It gave me a better understanding of what this concept of "black joy as resistance" truly means to me.

So what is resistance? According to the Cambridge dictionary resistance is defined as "the act of fighting against something that is attacking you, or refusing to accept something" and joy is defined as "great happiness". So great happiness being seen as the act of fighting something that is against you. In the world of classic art history,  it seems like portraying a melanated woman as joyful, poised, feminine, elegant, refined, wealthy, or anything in that vein has been suppressed, fought against. Bringing that to the light and showing more of it, is an act of resistance. I'm not a huge fan of the word "resistance" because what you resists persists. I much rather the word "dissolving". Instead of fighting against the lack of representation, I'd rather add to it. That's how my artwork for this project was born.
I love Alphonse Mucha's work. It's beautiful, it's graphic, it's simple and complicated at the same time. His work often include symbols that I believe are connected to an interest for mysticism. And like many popular artist, there's not a lot of women of colour as a subject for his work. So I decided to create my own version of it, to add what I feel is missing. Something that would be fitting to a woman of colour, including the symbols behind her.
Unfortunately my work was not selected for the call (1 of 41) but I still wanted to share it with you. Funny enough, sharing this feels like an act of resistance/dissolving this barrier to Black joy. If you're interested also in dissolving this barrier by bringing a piece of that ideology in your life or offer it as a present, head over to my Society6 page : https://society6.com/art/melanated-flower for some items featuring this particular artwork. 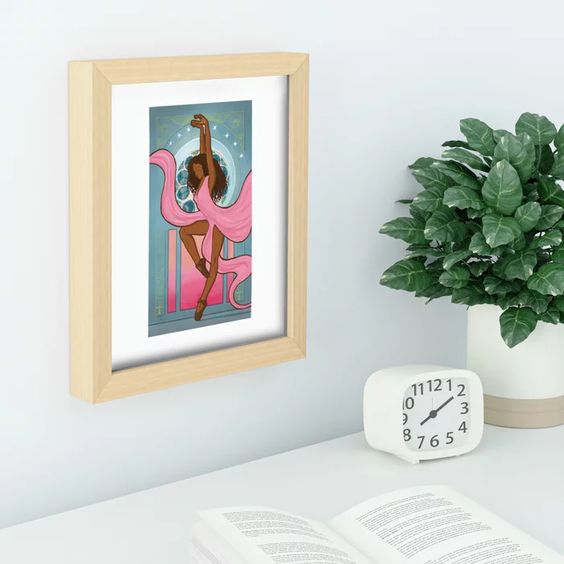