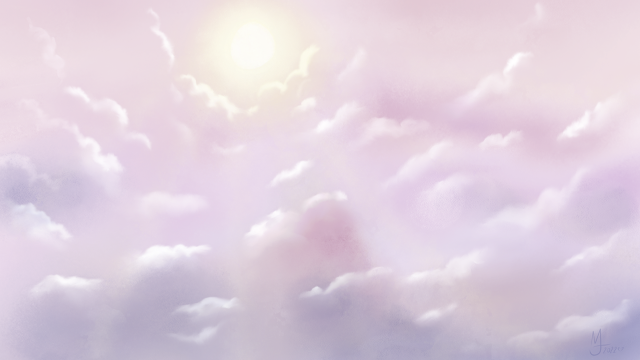 Earlier this year I was commissioned by Mural Routes to create a digital background as part of their project to get 10 Canadian artists to create original backgrounds for the public to use. Of course I decided to create a cloudscape. This particular one is inspired by a photo I took of the sky last year. It was one of these moments where the sky looked surreal and the photo looked photoshopped. I was in awe. And the idea of the sun piercing through the clouds in a similar manner, with my own little twist on it, became my subject.

I'm quite happy with the final result. The goal for me was to create a background that plays on the idea of being in the clouds. It's very familiar to me since I tend to have my head in the clouds a lot. And I love the play on word of the cloud being a digital location to store all kinds of things. I'm not as witty as rapper Lil Wayne with play on words, but I imagine that would be a word he could play with and come up with something clever. (I'm a big fan of his Carter IV album for his play on words.... but that's another story)

So you can download all 10 digital artworks for free on https://muralroutes.ca/digital-backgrounds/.

If you use my background, please send me a screenshot. It would be fun to add them all in some sort of gallery. Not that I expect 1000s of people downloading mine, but a few would be fun. In any case, the most important thing is that it lifts up the spirit of people using it and people witnessing it :)

Here's a little vlog I quickly put together about it.

Here's an example of what can be done with it on Zoom :)