Mindfulness is described as "the quality or state of being conscious or aware of something; a mental state achieved by focusing one's awareness on the present moment, while calmly acknowledging and accepting one's feelings, thoughts and bodily sensations". I chose to call my second series of cloud paintings Mindfulness because they enabled me to become more aware of my surroundings and the many connections clouds have with the mind.

How did it all started? 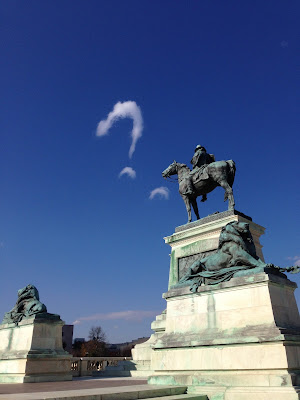 How did I become interested in clouds? It probably started a long time ago, when I used to observe shapes in the clouds as a kid. But I progressively became more acutely aware of them over the past couple years. I believe the turning point was when I saw a cloud shaped like a question mark during a trip to Washington DC, as shown in the picture. Not only had I never seen a cloud shaped like that before, but it appeared while I had a lot of questions in my mind. Seeing this cloud at that very moment felt like a personal message,  a reflection of my own mind, encouraging me to keep asking questions and to look for signs.

Unbeknown's to me at the time, it is after that trip that I started to pay more attention to clouds. I was taking more pictures of clouds. I was even paying more attention to them when I was sketching buildings, taking extra time to depict the sky in the background. It was as if, subconsciously I was slowly bringing them in the forefront. At the same time, as a closet artist, I had been longing for a more creative and fulfilling life. But I kept starting and abandoning many art projects, over and over again : Searching for the "right" topic to cover, battling between what I was curious about and what I thought would be successful.

This constant dance of starting and stoping art projects was very draining and never satisfying. I was afraid to step into unchartered territory. Who was I to start creating these elaborate ideas? Was I ready? Was it too early? Was it crazy? What would others think? I had tons of creative ideas flooding my mind yet I was afraid to pick up a brush and turn them into real paintings. As a result, I avoided painting these ideas for as long as I could, and released the creative pressure by doing more sketches until that one day I found a large discarded canvas in the recycling room and I decided to bring it home with me and try to paint something big. I had removed one of my excuses for not painting. In my mind, using a recycled canvas would be ok because if the painting didn't work out, I wouldn't have wasted a brand new canvas. The canvas sat on a table for several months before I decided to prime it to start something new. And it took another couple weeks before I finally decided to paint one of my ideas on it. It was my version of an Orphic Egg, based on an ancient mythical Greek story that I decided to call Creation. I even recorded myself painting it and uploaded the video on YouTube.

What a rush! I loved every aspect of the process: painting, recording and editing the video. I had finally done it. My first large painting! This gave me confidence to enlist it in a couple art contests and put it up for sale. But when I didn't get the same enthusiasm I had for the painting, doubt came back.  Maybe it was too big, maybe it was too soon, maybe it wasn’t good enough, maybe it was too weird. So I put the painting aside and went back to creating smaller more “normal” artworks. I retreated into my comfortable setting of making sketches in my sketchbook. But Something was missing. I kept wanted to paint more. So I decided to just pick one simple topic and run with it. As I was trying to figure out what subject to focus on, I finally realized that one constant subject in all my recent attempts were clouds. They even made an appearance in my first large painting and they were fun to paint. So I thought : Why not spend an entire year painting clouds as an non-intimidating way to create more artwork? So at the beginning of 2017 I decided clouds were going to be my muse, my main subject for the year. As I started to paint clouds I became aware of a Kickstarter Project initiative called Make 100 to encourage creators to create more. This was the perfect opportunity to keep me accountable. So I enrolled and decided to create 100 small cloud paintings.

From 100 Cloud Paintings to the Mindfulness Series 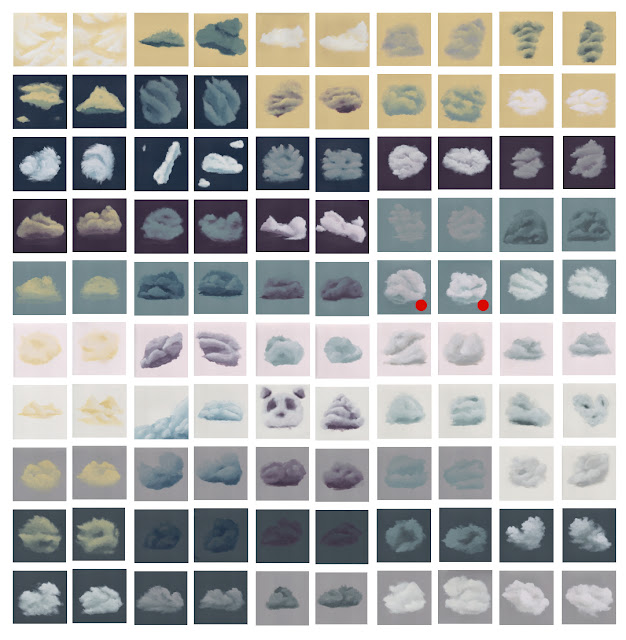 Before the Mindfulness Series, there was the 100 Cloud Paintings Series through the Make 100 Kickstarter project. It was the perfect opportunity for me to complete an art project from start to finish and practice making clouds. It had a deadline and, if successful, people would be able to buy the art. To keep me on track and focused, I limited my colour palette and proceeded to create 100 small paintings on 6" x 6" acrylic papers. It was fun to see them evolved as I was getting more comfortable with the tools and the medium. I was also recording videos of the process to help fund my campaign. Unfortunately, the project didn't get funded. I was disappointed, but I was already on a roll and I wasn't going to stop until all 100 clouds were painted. Having put so much time and effort into it and not to mentioned the many social media posts about it, I didn't want it to be another abandoned art project. Besides, it was fun. So I completed the 100 clouds and in the end I was able to sell two original paintings at the time, from that series.

Taking the cloud paintings to another level

I thought that painting 100 clouds would get them out of my system. Instead, they open new doors. My focus on this one simple subject somehow expanded it. I heard Tony Robbins say that "What you focus on grow". I feel this is what happened with my cloud paintings. As I completed all 100 cloud paintings, I realized that the cloud represented more then just clouds, they also represented thoughts , concepts and ideas. What if I explored cloud paintings as thoughts? What would various thoughts look like? What if different thoughts could have different shapes and characteristics? What if I place the thought clouds into different settings? What if I went a little larger? What now? A new challenge.  Now that I was done with the 100 small cloud paintings I felt comfortable increasing the size of the canvas from 6"x6" to 9" x 12". 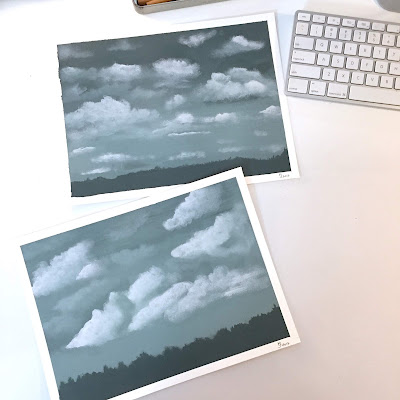 The first two larger paintings I create were very simple : Chasing Clouds No 1 and No 2. I simply painted landscapes with cloud formations to put the clouds in context. I thought they were good but boring. It was safe start but it didn't feel right. I needed a challenge. Chasing clouds felt pointless, I needed to focus on the fact that they weren't just clouds they were thoughts, ideas, concepts. I needed to create around that : Clouds as a representation of the mind, because I had realized how much the mind had a big influence on the outcome. I had realized that clouds were a reflection of our state of mind and out experience which was giving them shapes and meaning. An everyone had their own interpretation based on their own experiences, which was fascinating to me. I needed to create around that, and that's essentially how the Mindfulness Series was born.