My Mural Internship : Answering the Call to Adventure

Earlier in the spring I got an opportunity to get a 1.5 month internship as a muralist artist assistant with John Pugh, an American trompe-l'oeil mural artist with large murals  in various areas of the world. It was one of these serendipitous opportunities that happened just at the right time and based on a series of events that led me to find myself in Northern California for the very first time.

It all started with me finding out about the 18th National Mural Symposium by Mural Routes last year, and deciding to participate. While there,  I learned a bit more about the mural opportunities in the city of Toronto, met various organizers and mural artists both local and international. One of the presenters there was John Pugh and I was very impressed with his work. Fast forward a couple months later, I joined Mural Routes as a member, started to attend a couple events from Street art Toronto and took one of the classes from Mural Routes called Introduction to Mural Art. There I met some great artists and decided to create a facebook group (Toronto Mural Artists) to keep in touch and help each other find opportunities to create murals. This simple gesture led to one of the members posting about the internship opportunity with John to which I replied and soon after, I was on my way to California. It was both exciting and scary at the same time, which I hear is a good thing.

Going there was quite the growing experience for me as I had never been to Northern California before, I had never stayed in a stranger's house before, and aside from the fact that other artists had been there before, I had no idea what to expect. But there were also many signs that were telling me it was the right thing to do : My lease was ending around the same time, I had no idea where I was going to live yet and I had created a vision board a the beginning of the year wishing to be surrounded by big trees, and this was exactly where the internship was going to take place. So I decided to answer what was for me a call to adventure. I put all my stuff in storage a couple days before leaving, and headed off to a little town called Truckee, California.

I tend to believe that everything happens for a reason. Despite staying at the hotel right next to the airport the day of my trip, I ended up missing my morning flight. There was an unusual delays at security check and a large group of us missed our flights. Fortunately, I was able to rebook another flight 2 hours later including my layover in San Francisco.

I ended up arriving in Reno, in the afternoon where I was picked up by John and his wife Annie. Before heading their home in Truckee (30 minutes away), we stopped over at another person's home to check out an RV, as they were looking to buy one to travel around the US in the summer to install murals. Since I got there later then expected, I ended up going with them. As soon as I stepped off the car, an Italian Greyhound ran towards me, jumped at me and gave me tones of kisses and then left. I was surprised, because not only are they an uncommon breed of dogs, they are not known to be overly friendly to strangers.  I took it as another sign that I was where I was meant to be even though I was a little nervous leaving my own Italian Greyhound (Newton) in the care of others for that long. For some reason, that encounter made me feel like it would be alright.

Then we went out for a nice dinner at a restaurant in Reno. I took in the natural beauty of the area on our way to Truckee. There was a beautiful sunset giving the mountains a beautiful colour and the moon was shining bright. I was inspired by nature from the minute I stepped out of the plane.  When we arrived at the house,  I was greeted by two giant dogs, Austin and Banff, both Irish Wolfhounds who happen to be of the same family as Italian Greyhound. Banff showed affection right away as you can see in the picture below where I was trying to take a selfie with him. And after a tour of the house and art studio, I headed to bed, ready for something new.

My intension for this trip was to be present as much as possible, observe and learn from every opportunity that presented itself. I ended up not only learning about mural art, but about myself, nature, California and the people I met during this trip. I'll be sharing this little adventure over the next couple posts and hopefully you get something valuable out of it. 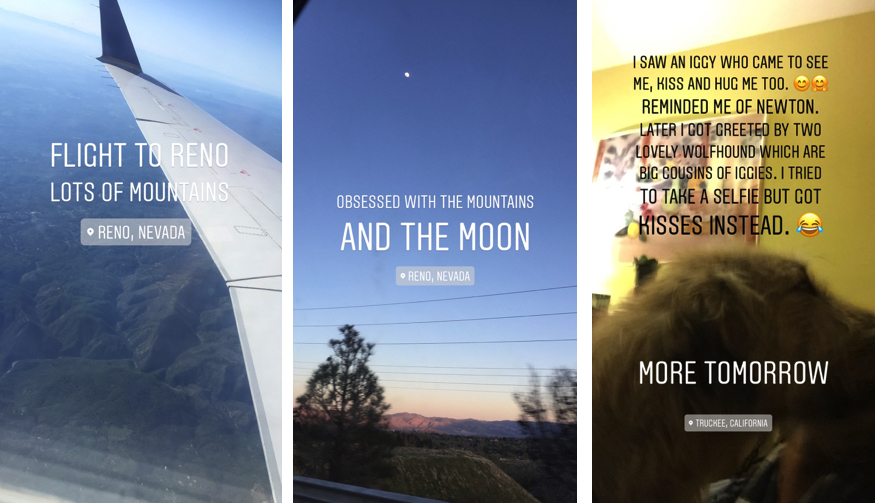