Lessons from 5 strategies used on my first Kickstarter project 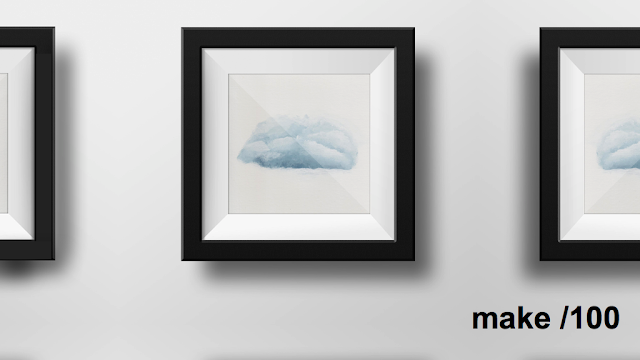 I've always avoided the idea of running my own Kickstarter project. Even if
many visual artists ran very successful campaigns, many also failed. And the idea of running a project that fails is terrifying. But for some reason, the Make 100 challenge from Kickstarter felt different. Perhaps it's the fact that it was initiated by Kickstarter and that the idea of challenging myself to create a series of 100 art pieces, warmed me up to the idea of joining. After seeing some similar project succeed under the Make 100 umbrella, I decided to take the plunge despite the fear of failure and the illogical shame that comes with it. Now that's I'm 1/3rd of the way to the deadline, I've learned a couple things so far from the strategies I used as a beginner, to try to make it a successful one. And I would like to share them with you. It might give you some insight if you're thinking of creating your own campaign in the future. 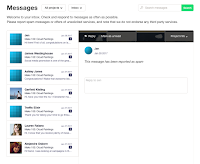 One thing I did not expect to get is spam messages within the Kickstarter mailing system. As soon as I hit the launch button, I received a lot of unsolicited messages from anonymous Kickstarter accounts selling their services to promote my campaign. You can imagine my disappointment receiving 10 messages selling me crowdfunding campaigns for hundreds and thousands of dollars and not one word of encouragement. Most of the accounts I received messages from had no activities on their profile. I'm not even sure they are real accounts, they could be bots. If they weren't they would waste their time soliciting on a $500 campaign. At least I don't think so. So be aware that this is something that's going to happen. Maybe they are valuable to people running larger campaigns, but the fact that they don't even check to see if what they're offering fit, they wouldn't be my first choice.

The silver lining in receiving so many spam messages on Kickstarter was that it made me realize that I could also reach out to fellow participants and ask for advice. So I did.  I reached out to a couple successful artists who also took part in the Make 100 challenge project and surpassed their initial goal. I asked them if they had some advice for newbies. Some of them were kind enough to reply (interestingly all first timers as well) and they recommended to post daily on all social media platforms and email previous clients. For a lot of them, the bulk of their backers were people they knew. The ones who seem to have more experience or a longer career in the field, seemed to be the ones who did better. One early participant was lucky to be featured on the Kickstarter newsletter and that helped boost her reach. Reach is probably one of the most important thing to focus on during a campaign. If you're lucky enough to be featured on a high traffic site, you'll be able to reach more people. Unfortunately I haven't seen a lot of promotions by Kickstarter about the #Make100 project other then a post about how many creators joined and maybe a handful of posts promoting some projects under this umbrella. I would have thought that for initiating the project, they would tweet about it a lot more often.

3. Reach out to more people on podcasts

I got a message from a former Kickstarter creator to beware of unsolicited messages selling campaign promotions at a high price. She suggested I take a look at Fiverr instead as there were more affordable options there. It's not something that had crossed my mind but so I decided to take a look and found a well rated online radio DJ who sold ads on his show for $12USD. I figured that would not be an expensive lesson to pay if it didn't work out, so I gave it a try. Three days later, I received the link to the show featuring my radio ad,  a download of the audio version that I could use as often as I like, a posts on his Facebook account (3400+ likes), a post on his Twitter feed (44,700+ followers) and a custom Google link to track traffic coming from his posts.

It's hard to say how much this has helped other than having a couple extra clicks from that specific url on my page. I only got 27 clicks from it so far and I don't suspect I'll get much more then that, unless I repost it myself. Since I already created my own custom link, it would defeat the purpose. The bulk of the leads coming from this ad would be by listerners searching for "100 cloud paintings" on Kickstarter, as it was the only way for his listeners to get to my page, and it's difficult to track. Still you can listen to the ad below, it's kind of fun to have a stranger create an add based on your content. It's a genius idea on his part to fund his show through Fiverr, but I think if I was to do this again, I would choose a radio show targeting a niche market interested in arts. Another lesson is that one tweet on a social media account of 44,7K followers doesn't make that big of a difference especially if there followers are not very engaged. Hindsight 20/20. 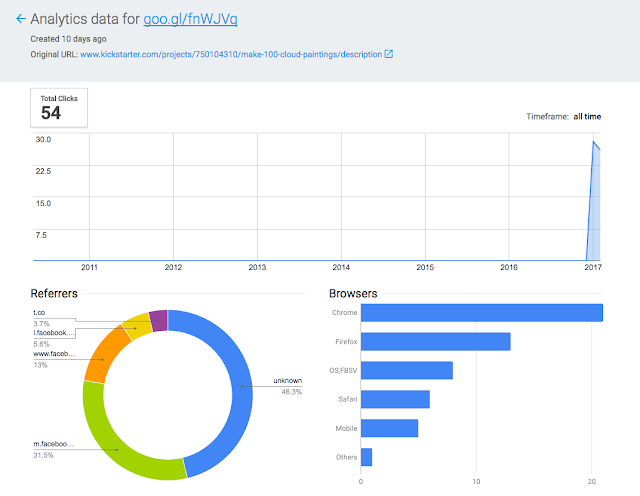 Right at the beginning of my campaign, I decided to use a shortened Google URL across all platform to see what kind of traffic I'm getting from my effort. I could have used different URL for different social media platform to get a better idea of which is more effective, but I kept it simple with just one. This link is used on Instagram, LinkedIn, Twitter, YouTube and in my email signatures. Basically, any opportunity to insert that link and get people to at least go see the page that I could think of was used. What I've learned so far is that it's important to reach as many people as possible. One of the reasons why project may fail is that they are not seen enough. To date I generated only 53 clicks (+27 from the Fiverr service), which tells me that I need to work on that aspect of my campaign. It's not being seen by enough people online and I will have to think of other strategies to get it in front of the right people.

5. Track and update my Kickstarter page

I've only realized today that there's a way to track traffic on my Kickstarter page using Google Analytics! What gets measured get accomplished. In the remaining 19 days of the campaign, I'll be able to learn where traffic is coming from, what works and what doesn't work.  It will be a great way to get a better understanding of it.  I also keep updating my page with better photos, more videos and better description as I'm producing the artwork. I'll keep you posted on the progress and results from this experiment.

If you have any questions, comments or advice, feel free to post them below.

Check out my Kickstarter page here to find out more.
February 06, 2017