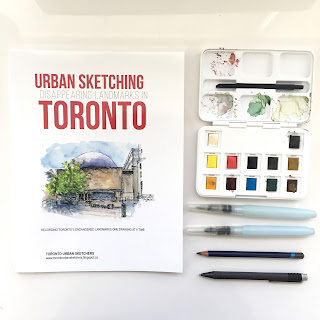 Crash! goes the wrecker’s ball, and another Toronto landmark disappears forever. Maybe this one was a well known and well loved building that stood out clearly on its street, or maybe an obscure Victorian that nestled in a side street, modestly hiding its part in Toronto’s history. Buildings like this are disappearing at a remarkable rate in Toronto, as the city evolves and changes with the times. Rather than try to fight the unfightable, a group of Toronto sketchers known as the Toronto Urban Sketchers decided to record these old buildings before they disappeared. They pulled together a list of buildings that were in some way historical, or just simply beautiful, but found themselves either slated for demolition or at least in jeopardy. Working both individually and as a group, they sketched these historical landmarks as they stood in place. On at least one occasion, they arrived to sketch to find the building already boarded and ready for the wrecker’s ball. In “Urban Sketching: Disappearing Landmarks in Toronto” you’ll find a variety of artistic interpretations of buildings from the old Loblaw’s warehouse to the Planetarium to Honest Ed’s, as well as many you may never have heard of. If you enjoy reading about Toronto history, and have an appreciation of the artistic value of architecture, you’ll enjoy “Urban Sketching: Disappearing Landmarks in Toronto”.