Robarts Library : The Subtle Pyramid of Toronto in Spring

I tend to be attracted to "mysterious" buildings and landmarks and one building that really gets my imagination going is the Robarts Library. It's been designed in a very interesting shape and contains a lot of reference to the number three, starting with the triangles that are repeated in patterns on the ceiling both inside and outside the building. It also occupies 3 acres (according to Wikipedia) and the footprint of the building is an equilateral triangle measuring 330 feet on each sides. 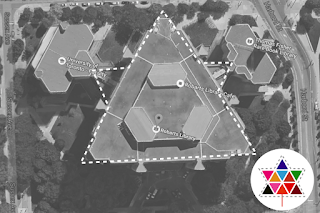 Another interesting observation about this building is that it was built for Canada's Centennial in 1967. When you look at the building from the top using Google map, it looks a bit like the Centennial logo with extra bits attached to the upper points. Coincidence? Maybe. Being that the building is made out of concrete, it's not an easy design to build. So why was it important to add these two wings on ether side of the building and connect them in such a way. Also, how awesome is the design of the top of the building? There's a lot of great shapes one can discover from it. It can maybe inspire a couple design ideas for new logos.

The painting I did is called Robarts Library : The Subtle Pyramid of Toronto in Spring is from a view you get from the ground level. It reminds me of an Egyptian pyramid and seem to have a similar effect (albeit way more subtle) of wonder when looking up at it that way. It was created for a project exploring the contrast of nature in the concrete jungle. There were 32 cherry blossoms in the area according to an article in The Varsity, the U of T Student Newspaper, as part of a gift from the Consulate-General of Japan to Canada. The trees were temporarily removed last year to make way for a renovation project and should return in 2018.

The renovation project includes a 5-storey glass extension that seems to unfortunately break the pattern that was established by the original architects. It will feature a large glass cover on the side facing Huron St, essentially the only side that doesn't have the extra extension. If I were in their shoes, I would have proposed to repeat the pattern and add the extension the same way it was designed previously and perhaps using glass to "modernize" it. But that's just the way my brain works. It will be interesting to see the final results when the cherry blossoms are back on site in 2018.