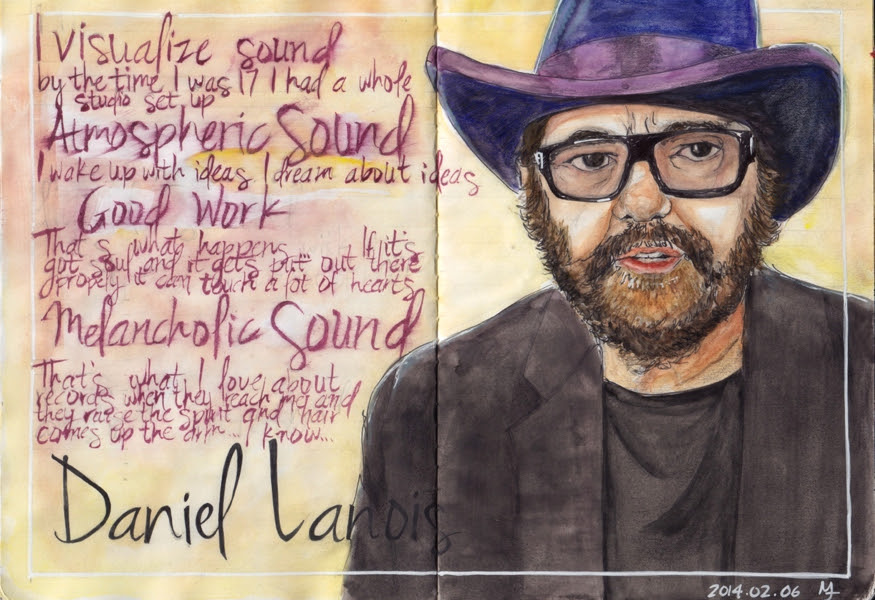 In the Artst Tlk interview with Daniel Lanois you get a glimpse of the creative mind of a very accomplished artist : Grammy winning producer, guitarist, vocalist and songwriter with his own star on Canada's Walk of Fame. Lanois is fortunate to have been able to figure out his calling early on in life and go for it. He had a recording studio by the age of 17. Hearing him describing sounds as "liquid", "atmospheric", "textural" and coming up with terms like "melody orphanage" really shows a deep love and understanding for his craft. There's a lot to learn from him :

Do Good Work
A significant part of good work is the ability to make a difference in someone's life. That's the purpose of art. For Lanois if it's got soul and it gets put out there properly it can touch a lot of hearts : That's good work. This reminds me of what Jeff Koon was saying about the fact that art is about people not the object. The intent behind the work seems to have a lot to do with the level of success that comes with it. I think this also explain how Pharrell's song "Happy" by Pharrell is so successful. It lifts up the spirit. Sometimes, I use the 24 hours of happy website as a mood reseter.

Immerse Yourself in Your Craft
In order to get to Lanois' level, you need to immerse yourself in your craft. He was so isolated that he didn't even know what was going on in the world when he was working on an album. He devoted a whole year working on the multi-platinum selling album So with Peter Gabriel. One way to immerse yourself is to create your own laboratory or place of invention and make sure you take good care of your tools and keep out any clutter that would distract you from creating.

Keep Learning
I'm a huge believer in constantly learning and improving oneself. Even Lanois does it. It's important to learn not only from books, but from doing things and from collaborating with peers. Also, don't be afraid of changes. Embrace it instead. It's just the natural way of things: The broadening of one's education will cause you to change your taste and you get to grow. This is why, I believe that artists that keep "reinventing themselves" stay successful. They keep learning and consequently they keep evolving and changing.

Be Aware of Your Inspirations and Take Action.
The Muse seemed to be making an appearance on a regular basis to Lanois. That's what ran through my mind when he said things like "I wake up with ideas and I dream about ideas,... It's a blessing and a curse... I have to get up and write the ideas down." It's one thing have a lot of inspiring ideas but they useless if we don't act on them. Step one is to capture them by writing them down. Step to is working on converting these ideas into reality.