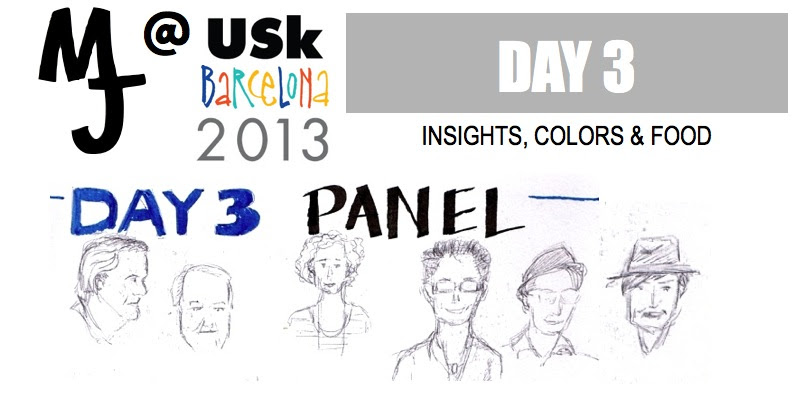 The final morning panel of the symposium gave me a neat little insight into the world of urban sketchers. One of the attendee commented on his take on the drawing style variations from one area of the world to another. He explained that he noticed that american sketchers draw to express themselves, european sketchers draw following rules as best they can and asians sketchers draw for fun. It's was an interesting observation. 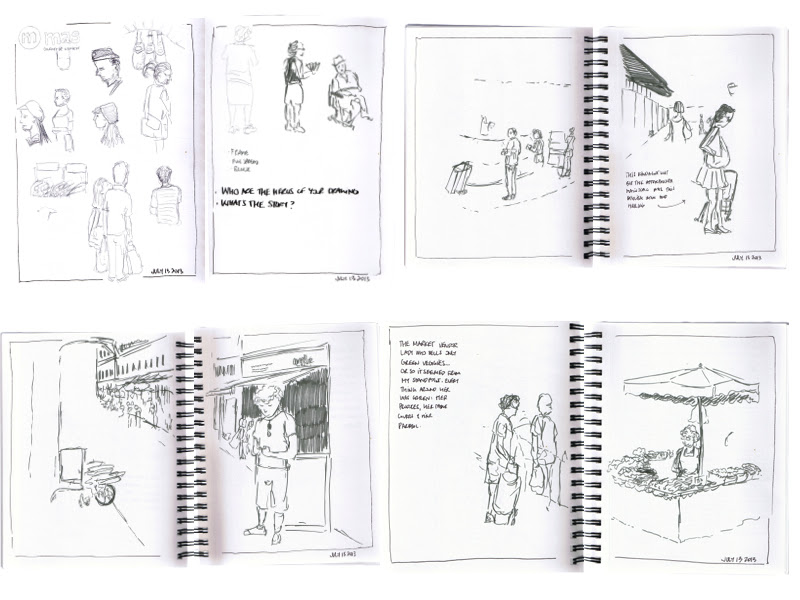 This workshop took me out of my comfort zone and as a result gave me a new point of view and more tools to improve my art. First, the whole idea of "choosing the hero of your story" was enlightening to me. Instead of just drawing scenes, we were taught to choose someone in particular in his or her setting and draw their story.

The first few exercises we had to do was to select characters and draw them and their stories but using only one drawing tool. At first I used a pen but the Ea and Marina encouraged me to try letting loose a little and use a brush pen instead. It had a completely different feel and I didn't have as much control of the line as I'm used too. I challenged myself to keep at it, even though part of my brain was reminding me that my drawings weren't as nice as I would like them to be. At the same time I was concentrating more on the potential stories around me.  You can see the first drawing on the top left is a little scattered in terms of story. But then, I drew this old men on a wheel chair who looked bored and sad around his friends, followed by a stylish lady with her stroller in the middle of the market, then a boy on his phone waiting for someone, and finally the merchant lady surrounded by greeneries, working non stop. 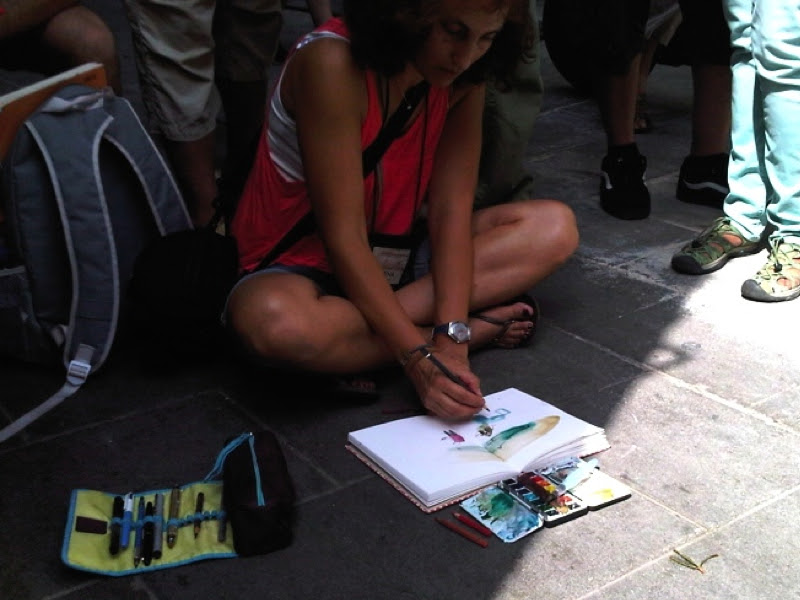 After this series of exercises, Marina showed us her technique for drawing scenes and stories fast by starting with watercolor blocks and finishing with watercolor pencils. I finally had to "break the spell"  of not using color and giving up even more control! 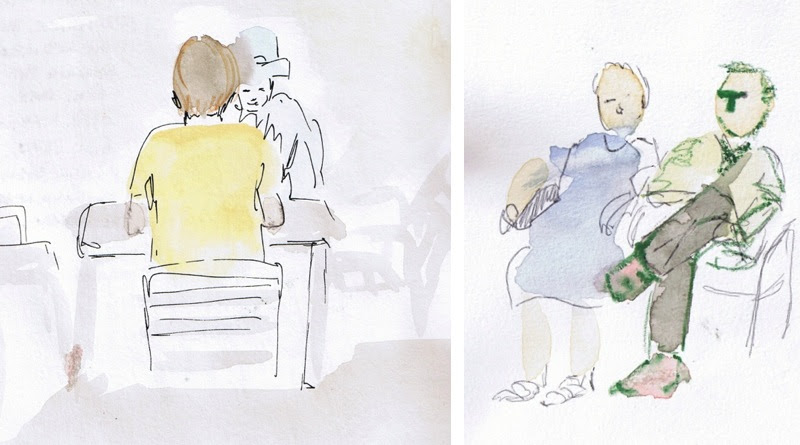 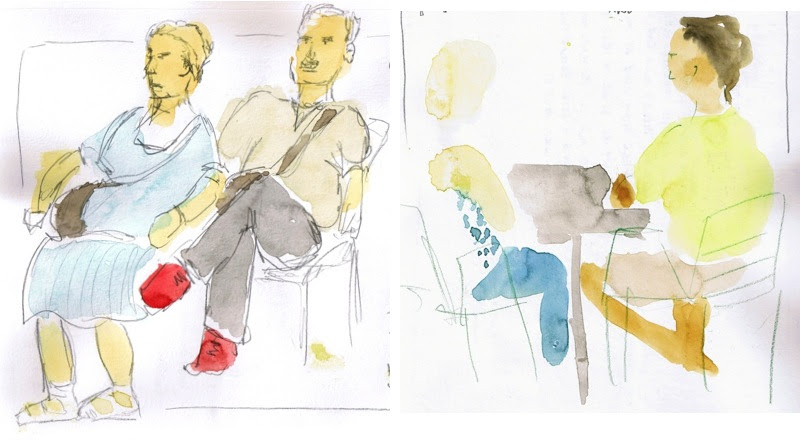 My first two attempts were interesting. I learned, through doing, how quickly it was possible to draw by starting with general colored shaped insted of using lines. I still was not too keen on my results but I started to see the new possibilities with this technique. Ea encouraged me to do one more and let go on contouring like I did in the first three sketches. On the last drawing I started to have a little more fun. I didn't get a chance to finish it but it's something that I'll definitely try again, especially after seeing the results from fellow sketchers, show below. 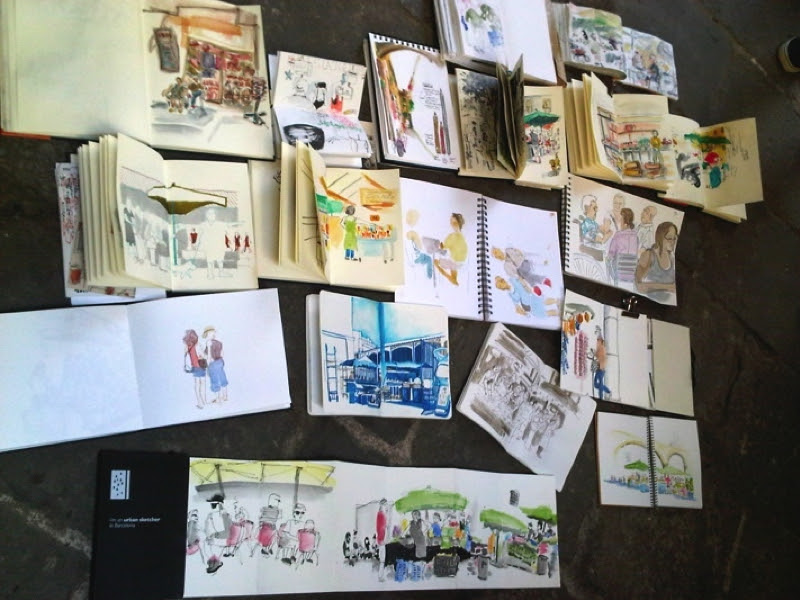 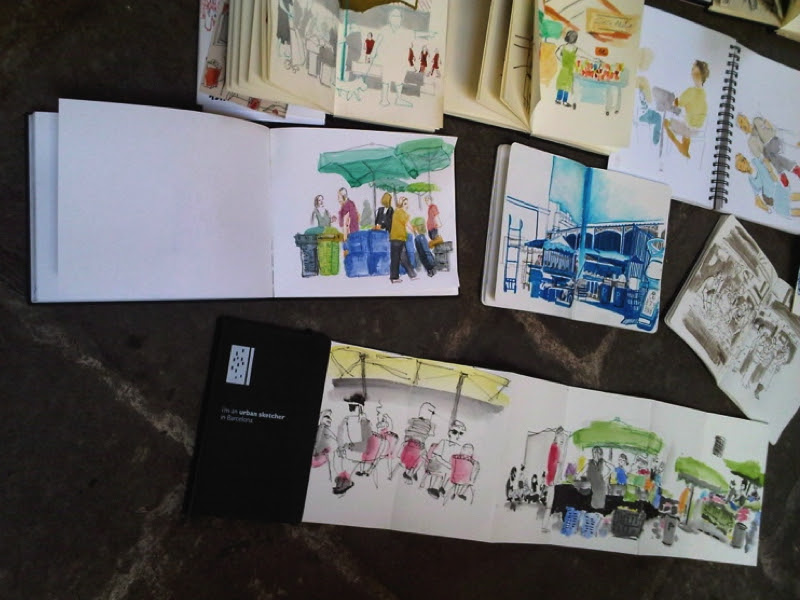 I particularly like the drawings at the bottom and the one on the left side above it. Notice how the color blocking with watercolors create the basic shape and the pencil lines are minimal, but effective. 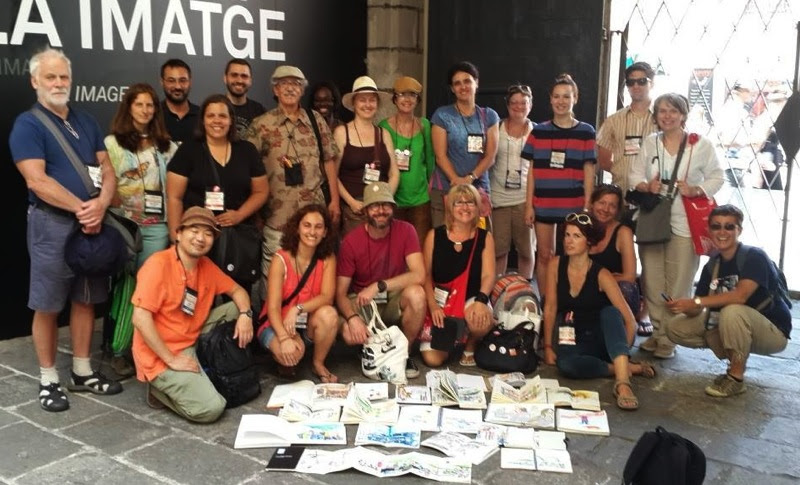 LECTURE : Drawing on Experience - Had to be there with  Fred Lynch 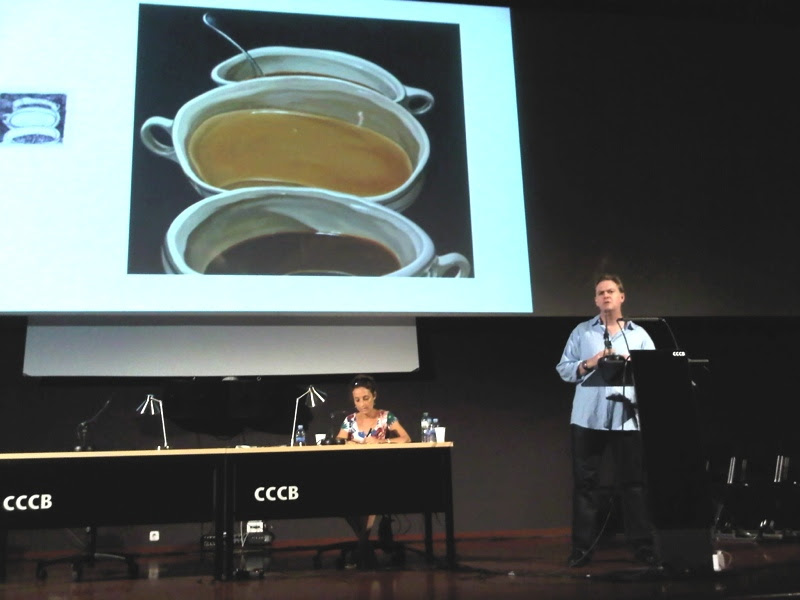 Here are some of the things that I retained from this lecture.
It was really neat to see his own art and hear how he came up with his series of painting related to coffee cups and sugar cubes and also see what his students came up with. I would definitely take a class from him again if given a chance. It was a very insightful lecture.

There was a sketch crawl and a group photo. But I was so tired, that I skipped it to take a nap and came back for the closing ceremony. It was way more than I expected. Swanky, the head organizer, gave a nice closing speech and thank everyone for coming and participating. 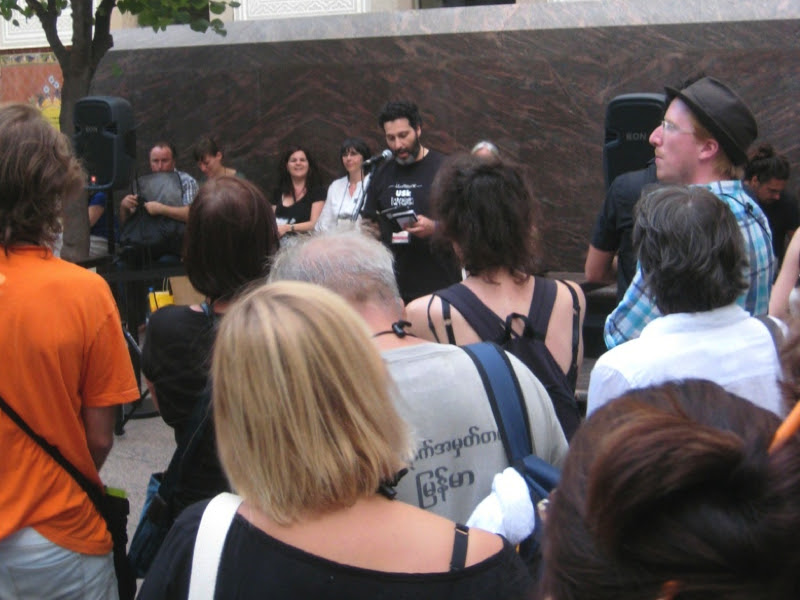 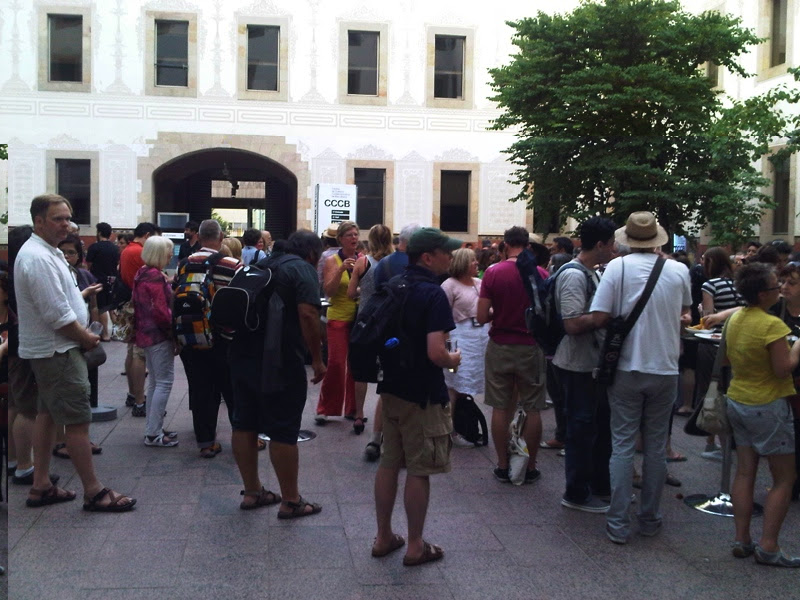 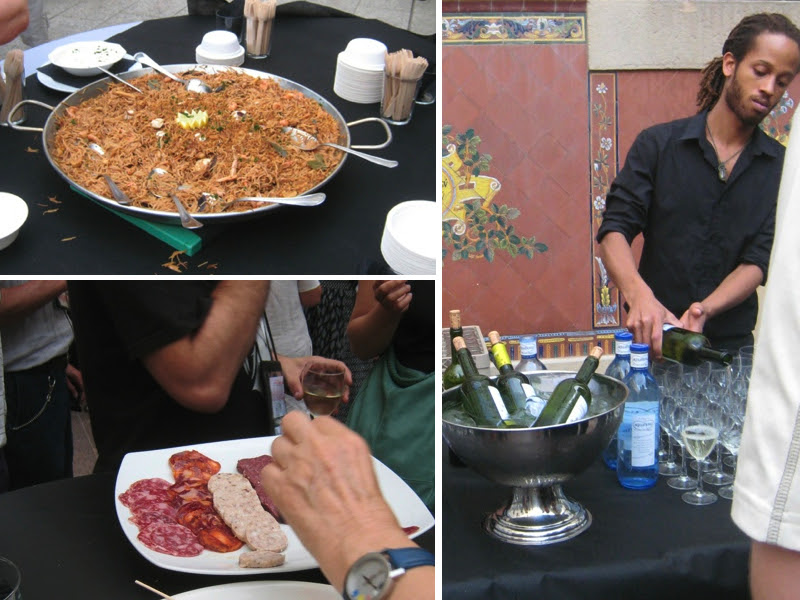 The organizers really took care of us, with a beautiful reception outside and amazing food and drinks. I should have taken more pictures of the food, but I spend more time eating, talking to the people I met and exchanging information to keep in touch. It's really neat to have new contacts from all over the world. 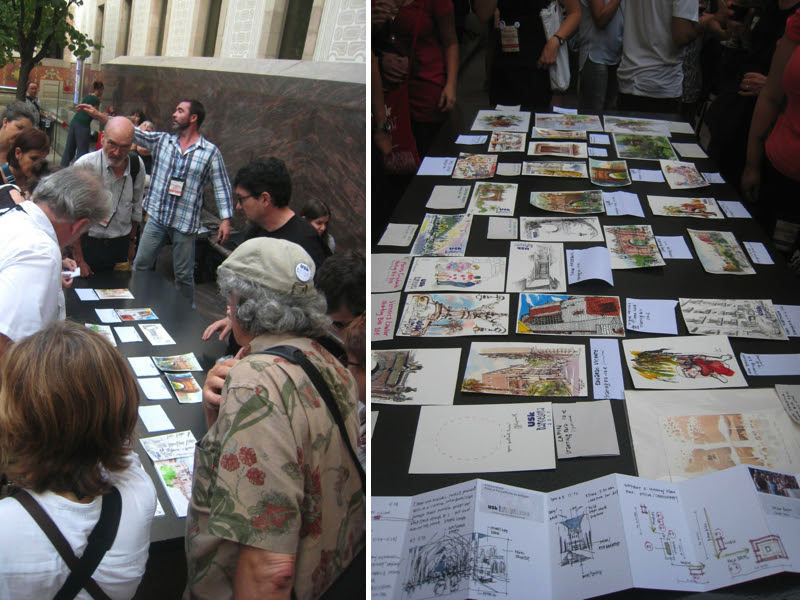 There was also an auction of the teachers' beautiful sketches.

And there you have it. All in all it was an amazing experience and I'm glad I was able to go and cross of another to do on my creative list.