I finally got the opportunity to attend a creative mornings in Toronto yesterday and I'm glad I went. Creative Mornings are international monthly lectures on various interesting topics. This event was founded by Tina Roth Eisenberg of Swiss Miss who wanted to create an accessible, inspiring morning even for people to meet: a TED for the rest of us. The topic this month is urbanism.
The event for the Toronto chapter was held at 401 Richmond, a really neat refurbished industrial building that used to produce tin ceilings, and now home almost 150 artists, cultural producers, micro-enterprises, galleries, festivals and shops. A really nice breakfast was also waiting for us upon arrival.
The presenter was Jennifer Keesmaat, Chief planner for the city of Toronto who's committed to keep improving the city of Toronto. Her main topic was the importance of "owning your city" in order to help it flourish. It's refreshing to see a civil servant who wants to make things better for the city and encouraging people to participate. I found a lot of similarities about what she was saying with what I was blogging about on MoOt while I was in Ottawa. Her three main factors to ensure the growth of the city in the right direction are 1) Belief in the vision for the future 2) Fully understanding the proposed changes and 3) Actively participating and engaging in the process to create positive changes. Makes me want to get involved and I just moved in. :) 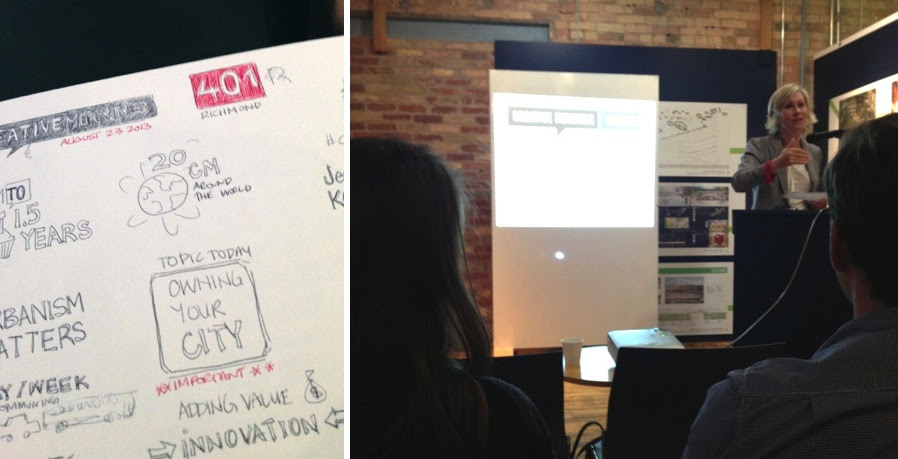 After her talk, attendees we invited to ask questions and then to pitch various ideas or projects. What a great concept! It's a great way to see what's happening in the city. One of the participants raised concern about the number of condo buildings being built with little attention given to the view at street level for pedestrians. The problem with this is that certain central areas are becoming less inviting and it defeats the purpose of becoming more pedestrian friendly. After all, "the city needs beauty", as Keesmaat pointed out in her presentation, and plain walls just won't do. There were no definite solutions to that problem from what I understood, but I wonder if it would be possible for the city to require these large condo developers to always include a creative vignette at street level to correct this problem. The city may not be able to force them to make their first floor accessible to the public or tell them who should occupy the main floor, but requiring street level art in might work. Something as simple as drawing on concrete with a bit of creative landscaping might work.
There was also an interesting concept from the city of Toronto where they encourage citizens to send picture of things they like about the city and things they don't like about the city. It's a simple and effective idea. It would be neat if there was a place where we could see the submission. Maybe a facebook page or something similar.
I also learned about other projects going on is the city, like Pecha Kucha's live stream event, Nuit Blanche Toronto and the #Be My Amigo project coming to Toronto. All in all it was a great event and I learned quite a bit in an hour. I'll definitely be back for more.
ON 24.8.13